Home The 10 Most Influential Leaders in Legal Services 2022_Profile Story 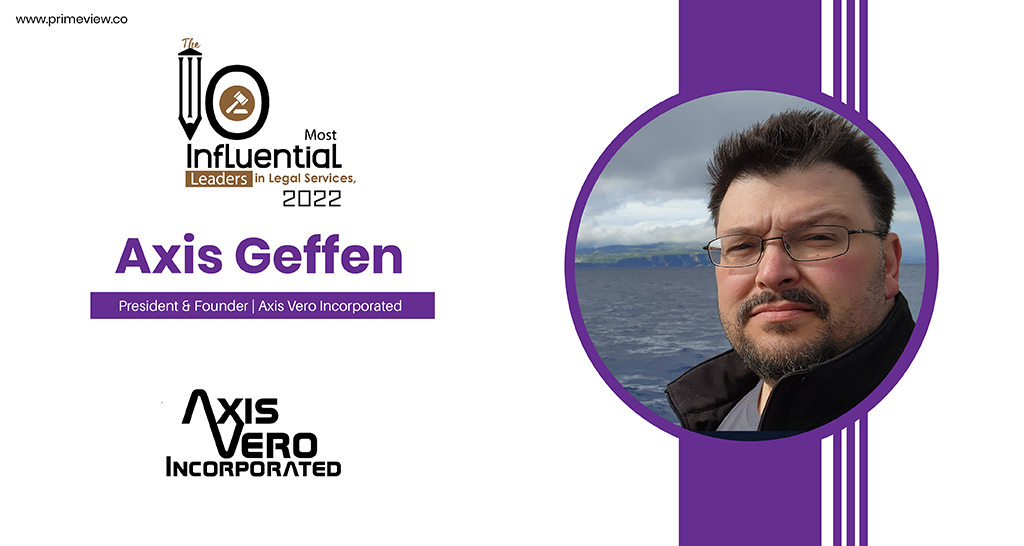 Axis Geffen: Finding The Truth All Over The World

As Private Investigation became a reality, private investigators began to act independently of police in matters where clients had low confidence in the police, and to assist the police in areas where the police faced limitations or lacked contacts and experience. Presently, Private Investigators are employed through a licenced Investigation Firm or Agency, who are in turn hired by individuals, businesses, corporations, charities, law enforcement agencies, and even government agencies to conduct research, document evidence and find answers that others don’t have the experience, time, money or resources to.

Over the years, PI companies have faced fierce competition, which means they rarely worked together. Their focus was primarily on competing to land a client or discrediting their competitors, rather than providing the best possible result for the client they had landed.

For many years, this frustrated and annoyed, a veteran Information Gathering Specialist named, Axis Geffen, and through a series of interesting events, he established Axis Vero Incorporated in 2015. “Many investigations were much harder and therefore more expensive than needed. In those days, it was far more common to end the workday sitting in your employer’s back room having a drink and discussing the failures of a day than it was to have a senior investigator teach upcoming investigators how to avoid pitfalls and improve themselves. In fact, many PI firms, had an unwritten tradition that if you did something wrong, you were required to bring your boss a bottle of Scotch or whatever they drank, and then the issue would be forgotten. That wasn’t right. It wasn’t good for clients, and it kept investigators from becoming better than their predecessors, so, I changed it.”– he states.

Upon establishing his investigation firm, Axis’s strategy was to avoid things he didn’t like about companies he had worked with for years. Instead of basing his firm on surveillance and then trying to supplement with other investigative techniques, research, and technology, Axis flipped this pyramid model upside down and focused the base on solid, accurate, and reportable research, time-proven investigation techniques and supplemented with surveillance (where necessary).

The private investigation firm offers nearly endless investigative services, from Research to Digital Forensic Analysis and Data Recovery. It covers every genre of law and strives to produce the most cost-effective and accurate results for its clients. Axis explains by saying, “In a nutshell, it can be said that we are in the “Answers” business. Clients (from any location and in any number of situations) approach us with “Questions” they want answered, and we determine the best path to get those answers and report them to our clients in a timely and reliable manner.” By reversing the investigative model, Axis effectively secured his firm’s position in the investigative community and during the pandemic, while many competitors closed their doors (temporarily or permanently), Axis Vero Incorporated continued to grow and thrive, currently opening additional locations throughout Canada.

Serving a Wide Range of Clients

Axis and his firm work with everyone, starting from common people to law firms, governments, airlines, banks, law enforcement agencies, and even other security and investigation companies from around the world. He feels happiest when he can build a rapport for long-term friendships. Axis doesn’t need every client to bring him a file every time they speak. Many of his clients feel comfortable reaching out with a general question or just to “check in.” As the founder of the private investigation firm, Axis prefers to be viewed as someone’s trusted resource rather than a common supplier.

Axis’s greatest advantage over his peers is his perception. “I don’t see competitors – I see people I can help become successful. I don’t see clients – I see people that need help, and I want to help them.”– he says. Instead of chasing money, Axis often works in flat fees or pre-set retainers, like a law firm, so he is not racking up hours or thinking about billing – he is fully focused on the job, and since Axis is not waiting to get paid, he has no bias in his results. Lastly, he’ll work with anyone that wants his help, irrespective of their financial status or clout.

Axis Vero Incorporated uses vastly different technology than many others. Currently, the firm offers a Digital Forensics Division headed by its Lead Digital Forensics Analysts, Aniko Kiss and Martin Musters. It also has a TSCM division for ‘bug-sweeping’ electronic devices, often supplemented by the developers of leading Canadian TSCM Software, Kestrel. It also operates in both Apple and PC environments, in-house and remotely.

At present, Axis is most proud of his client to colleague ratio. He feels that while it’s great to have a state-of-the-art Digital Forensics lab, countless resources, frequent awards for service or status, and even opening new locations, the most exciting thing is knowing that so many of his clients are considered personal friends. Many started as Axis’s direct competition or a law firm supporting an opposite side. However, today they are the people that Axis reaches out to, or they can reach out to him and just say ‘Hi.’ “I don’t feel like that is as common as it should be for other people in our industry. PIs have a long history of large egos, solitary lifestyles and one-off assignments, the way I see it, clients should feel comfortable to contact you always with anything or nothing.”– he says.

Axis feels young investigators face the challenge of gaining knowledge in a field of often paranoid or restrictive superiors. Many of the senior people in Security and Investigation firms have a very limiting attitude towards learning. While a few want young investigators to know what to do, they don’t want to share knowledge, as often, they have gaps in their training and experience themselves. “Once you succeed at learning how to do something, they (managers) often shelf you or limit your growth because they’re worried that you might outshine them. It’s a real problem in investigations that we’ve worked hard to overcome.”- he says.