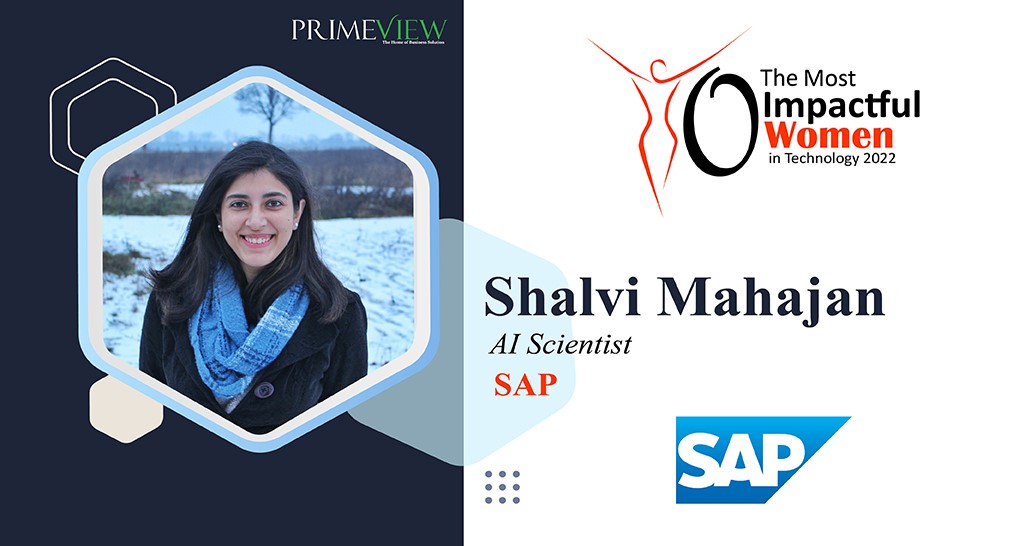 An experienced data scientist and software engineer, working for SAP SE. Headquartered in Walldorf, Baden-Württemberg, SAP SE handles software development of various business processes of its clients. SAP ERP is what businesses and companies know most about, which refers to an integrated business-standard software package. SAP S/4HANA is the latest generation and successor to classical SAP Business Suite, based on SAP HANA in-memory platform and can be used in the cloud, on-premise, and hybrid environments.

Shalvi did her schooling from Delhi Public School, Jhakri, Himachal Pradesh, India. During her childhood, Shalvi’s parents recognized her interest in Computers, in which they fully supported and encouraged her. Hailing from a small town in India comes with its challenges. However, Shalvi was fully determined to contribute to the field of computer science since her childhood and started learning her first programming language at the age of 12.

Shalvi started developing simple games and programming projects at her school level; her passion for Computer Science soon became more prominent, and she decided to choose it as her career. She completed her B.Tech in Computer Science and Engineering from NIT Hamirpur, India. During her Bachelor’s, she worked on various technical projects with coding challenges; she also secured two paid internships, one at Institut Eurecom, Sophia Antipolis, France, in 2016, and the other at Athabasca University Canada with a Mitacs scholarship. During her internship at Eurecom, she analyzed datasets for fraud detection in voice telephony, which was an insightful experience for her.

Additionally, she attended the Annual Computer Security Applications Conference, where Shalvi presented a review of two research publications. This internship initiated the spark of pursuing Data Science in the future. During this time, she also worked as a Remote Research Intern at Athabasca University, Canada, building an android application for teaching platforms.

After completing her B.Tech, Shalvi joined Samsung’s R&D in Delhi as a Software Development Engineer, where she worked with a team of talented engineers, but she missed working on data-related tasks and wanted to explore that field. Later in 2018, she left Samsung to pursue Masters’s degree at TU Munich. During her Masters, she also joined Allianz Technology SE as a part-time data scientist, where she was mainly involved in developing NLP tools for unstructured documents. Later in September 2020, Shalvi graduated from TU Munich and finally started working for SAP SE, Munich, Germany.

Shalvi says, “I think the motivation to keep learning and growing in the field of Data and computer science, being capable of contributing to the society with every bit we do, keeps me going.”

Apart from her Job, Shalvi works on various personal technical projects and solves challenges, which is a fun exercise to learn the depth of the field. She has also contributed as a speaker at multiple Technical conferences by delivering basic to advanced Data Science/Computer Science topics.

Additionally, Shalvi is mentoring a WomenTech group, where she is guiding six individuals from all over the world, helping them find their paths in various technical fields. She also arranges counseling sessions for students and professionals to help them with the necessary knowledge and experience.

With so many things that she works on, Shalvi is an avid traveler. She loves to travel places, explore new cultures, learn new languages, and try local cuisines.

Shalvi says, “Yes, the gender pay gap does exist sometimes at some places when women are often under-evaluated for the work.” She feels that the wage structure needs to be appropriately defined, not based on societal biases, but rather on the qualification and the work a person provides.

She adds, “In order to create a change, awareness is a must. From my side, I guide my female mentees and make them aware of the challenges that they could face and be aware of such gaps so that they can ask for what they deserve.”

When it comes to advising upcoming female leaders, Shalvi says, “Don’t be afraid to go on and speak up, even though women face so many challenges along the way, but it’s only you who can make it happen.” She adds, “There are so many famous and successful female leaders, who definitely would have faced all of these challenges that we face, but nevertheless they combat those problems, and they are idols to everyone now.”

Sezer Ozmutlu: Changing the World of Aviation for Better