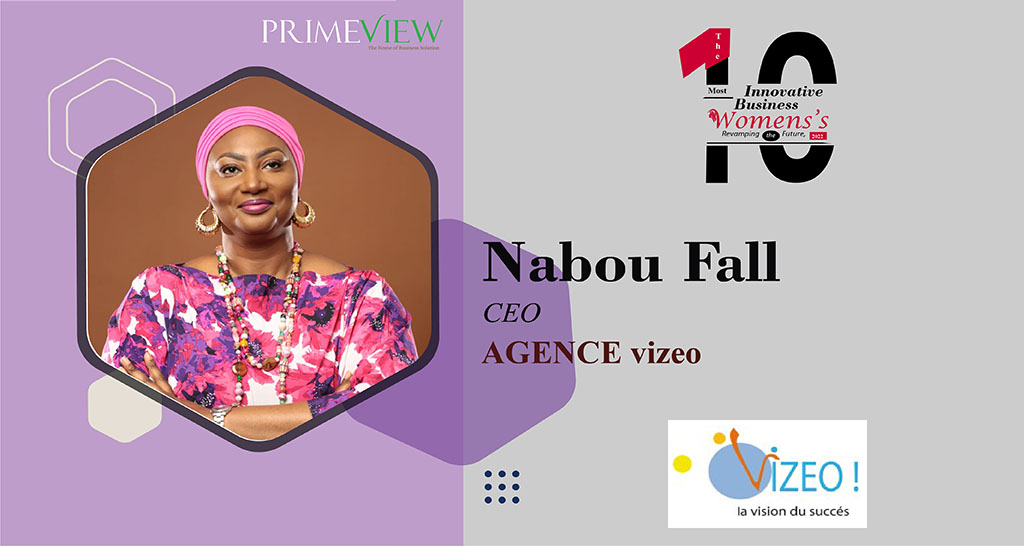 Transform Positively the Narrative of Africa

There was a little girl with dreams of changing the world. She understood that she needs to be an excellent student to change the world. That girl didn’t create any breakthrough inventions. However, she discovered that she could make a difference every day in the way she interacts with others. This girl’s story is a story made of sweat & hard work from being a high executive in the telecom industry in various African countries to becoming a renowned thought leader in the communications, personal branding, & women empowerment space on the continent.

Meet Nabou Fall, the General Manager of VIZEO Agency. As a PR company, Vizeo is catering customers’ needs in terms of communications and personal branding strategies. It is a team of experts and consultants in artistic and advertising production and a Pan African and global network of partner companies.

From PR & Communications, mixed with Nabou’s commitment toward African Women, she started working informally with passion with women on the Continent. Nabou started a blog in 2009 called Naboulove, and from that blog came out a magazine with a lot of audiences mainly in Nigeria.

Nabou was invited to give talks to women. Her position as an entrepreneur positioned Nabou naturally as a woman leadership expert with high-impact communications skills. From the beginning of Social Media, she was sharing her thoughts, and quotes which seemed to inspire lots of women to shift the way they own their narrative & storytelling. Simultaneously Nabou’s company was still active and she extended her activities to several African countries outside of DRC where she was based at that time.

Nabou and her team have organized events in Nigeria for the Dangote family as well as conferences in Congo Republic & DRC. As she moved her company to West Africa namely in Cote-d’Ivoire, she evolved to PR & Personal Branding as the demand from her audience was rising.

Nabou feels, that being able to empower people and allow them to become leaders in their ecosystems is her greatest accomplishment. When Nabou sees most of the people who have worked under her supervision succeeding in their respective careers, it is a success for her.

She believes if anyone she works with, has been impacted by her actions, positively, then Nabou feels that each impact is perceived as an accomplishment for her.

Once Nabou thought, she could not focus enough on her purpose. She lost her money, and time and she failed. As she was lost in between her projects, and she wasn’t careful enough, a few of the people who worked with her turned out to be dishonest and stole from the company. Since then she has learned to focus on her purpose. Although that event had led her to misplace investments, that eventually affected her cash flow at some point. Nevertheless, Nabou understands, that entrepreneurship is not smooth sailing, it’s a bumpy road and it takes passion, faith, and commitment to pursue.

Nabou believes success equals alignment. Her values her mission & her actions must be in alignment, so she can feel content & satisfied.

Nabou says, “In my journey in life I dream to see the ‘Africa I know’ discovered by others. I want the world to stop comparing Africa to Europe & appreciate Africa for its richness in culture, values & talents.”

Nabou works towards her dream each time, she works with corporations & individuals on their branding. She urges them to dare to be authentic & embrace the uniqueness that lies in the culture. She feels, that enough is said negatively about Africa, it is time Africans own their narrative & tell their stories with pride even if they are sometimes painful.

Nabou has recently launched a training academy called Nabou FALL Akademy. It is a Leadership training, and coaching academy, with a blended approach that will soon be launched officially focusing, on transformational communications around Personal Branding. She is also a Partner and Co-founder of Impact Hub Abidjan, an incubator that aims to empower Entrepreneurs through specific programs implemented in partnership with DFI’s.

As a philanthropist, Nabou has started an initiative called Wimnet. Here, she and her team provide free training mostly in digital skills to women entrepreneurs. In the last 6 months, they have trained 1000 women all over Africa.

Nabou feels the future will be more digitalized, and paradoxically human-centered, in its approaches to business. She and her team are aiming at building platforms that will facilitate the end user’s usage and ease of access.

Nabou feels a leader should be generous & firm at the same time. Generous enough to allow people around him/her to show up authentically and firm enough to take a stand when it is necessary. A leader must care about his/her people without crossing a certain line & he/she must be the carrier of the company’s purpose & values daily.