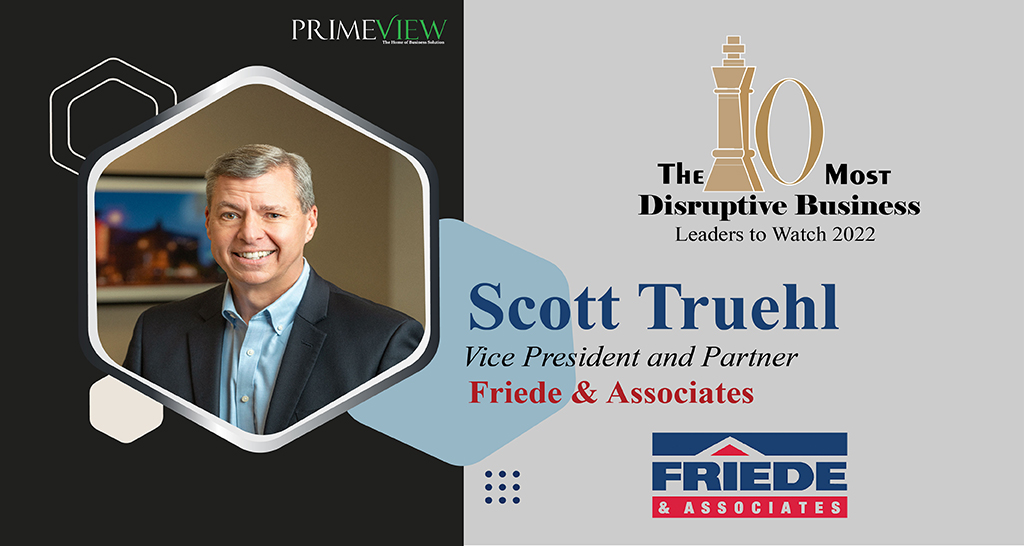 Friede & Associates is a fourth-generation commercial general contractor that serves the state of Wisconsin. The firm is typically pre-selected, by its clients early in their construction process, as Friede & Associates can assist them with finding land; developing plans; obtaining all permits and approvals; negotiating municipal incentives; building the building; and occasionally, even helping contract for furnishings and equipment.

The company’s direction changed dramatically in 1998 when Scott Truehl joined the company as an Executive Vice President and Partner.

Prior to joining Friede & Associates, Truehl spent eight years working for Wisconsin Power & Light, a regional utility, in a variety of management capacities. During his last two years at the company, Truehl was the primary industrial recruiter for his firm, assisting businesses from around the Midwest in relocating to southern Wisconsin. During this effort,Truehl eventually realized that there was only a handful of buildings available in his service area for companies to move into, meaning that many firms wouldn’t even consider relocating because they felt they didn’t have enough time to get a building built. Truehl felt there had to be a way to solve this problem, and so he met with a handful of commercial contractors to solicit their thoughts. Armed with a better understanding of the many types of industrial buildings and the real timelines for each, Truehl met with his senior management at WP&L and proposed creating an informal network of about a dozen general contractors that served the WP&L territory that he could use to create anonymous proposals for industrial prospects to consider. In each case Truehl would pick the best two or three of the firms, based on their specialties, location, or availability, to solicit proposals for his clients from. Fortunately for Truehl, his management team believed in him and gave their go-ahead.

The results were overwhelming. Numerous prospects, who otherwise might not even considered locating in Wisconsin because of the lack of available existing buildings,chose to work with members of Truehl’s “team” to locate their operations within the WP&L territory and construct new facilities. The single biggest factor in this successful effort was simply showing the prospect that the builders could typically provide them with a custom-built building that fit their schedule. Also, by educating what was possible, the clients ended up getting custom designed buildings, and builders got the opportunities they wouldn’t have without Truehl’s efforts. This connection didn’t go unnoticed by the builders, as many saw how effective he was in identifying the prospects needs and representing their proposed solutions to the clients. As a result, more than a handful offered Truehl opportunities to join their firms.

What excited Truehl about Friede & Associates was the chance to completely change the way it had been operating and selling its services. One of the first steps was a name change. The firm had been known as Friede Brothers Construction for over 50 years and had a good reputation as a local firm that typically performed municipal and industrial work within about 30 miles of their Reedsburg (about an hour north of Madison) location. As part of the recruiting process, Truehl’s partner Roger Friede agreed with him that the firm needed to market itself as a professional service firm that partnered with its clients the same way they partnered with their accountant or attorney. So, to help with the new focus, Friede Brothers Construction became Friede & Associates, and immediately began landing projects in Madison and across the southern half of Wisconsin -the same territory that he served at WP&L. Now, nearly 25 years later, the firm has not only continued to grow and to serve its customers but continues to offer its clients much more than just the ability to build their building, assisting them with all aspects of the construction process from concept to completion.

Truehl believes, the biggest challenge for him, and the entire construction industry, is the shortage of construction workers. As a company, Friede & Associates looks to find and train both men and women in the industry to allow the company to grow continuously. The firm believes strongly in providing its employees ongoing training and is a regular participant in Wisconsin’s Associated Builders & Contractors (ABC) Apprenticeship Program and Emerging Leaders training.

Truehl is also a well-known face, as he regularly speaks at high schools trying to encourage kids to pursue careers within the construction trades. Friede & Associates also participates in high school apprenticeship programs to give kids real-life exposure to the construction industry and will have two new “graduates” join the company this summer.

Just to keep up with its workload, the company has aggressively adopted modular construction as a solution for limited staff. Having pre-assembled structures that are constructed off-site not only reduces Friede & Associates’ project-specific labor needs but also significantly reduces the firm’s construction schedules. The result is higher quality buildings at lower prices and quicker delivery. Once again, Truehl and his partner needed to change the way everyone looked at how buildings needed to be built.

Truehl says, “The other challenge I constantly am facing is keeping us looking at ways to improve our products and services. I’m always looking to see what we can learn from other industries and the amazing business leaders that we are lucky enough to hear from.”

Nothing makes him crazier than when he asks why they are doing something the way they do, and the answer he gets is “We’ve always done it that way”.

When Truehl recently asked an industry professional who was doing something the best and they said Friede was, Truehl said “Great, so that makes us the big fish in a small pond… it’s time to go find a bigger pond and find out how they do it there:”

Truehl considers himself incredibly lucky to have had a series of great bosses and mentors. These people took a chance on Truehl and gave him the needed opportunities and responsibilities that others might not have, based on his age or lack of industry knowledge. The chance to succeed, and fail, early in Truehl’s career has provided him the confidence that together anything can be done.

Truehl is quick to offer his time and help to people in and around his industry because others have done so for him. Truehl is one of the founders, and a regular speaker at the Construction Leadership Network, an organization that supports construction companies across the US and Canada. Truehl says, “We should be able to learn from each other rather than always making the same mistakes.”

Through this network, Truehl has been able to share his experiences directly with young sales and marketing personnel, other construction executives, and key supplier partners. Truehl has also gained much from the others that shared their knowledge with the group.

Throughout Truehl’s career he has always believed in giving back to his community. This involvement has included serving as a city councilman in two different communities, as well as serving on dozens of boards, committees, and commissions on the local, state, and national level. He currently serves as a member of the National Associated Builders & Contractors (ABC) Inclusion, Diversity and Equity Committee and on the Agrace Hospice Foundation Board of Directors to name a few of his endeavours.

Truehl was also named one of the “Top 100 in Construction & Real Estate” in 2021 at the World Real Estate & Construction Forum (WRECON) in Las Vegas. Earlier this year he was recognized by CXO Outlook Magazine as one of “The 10 Most Inspiring Business Leaders of 2022“. Exeleon Magazine also named Truehl one of the “Influential Leaders to Follow in 2022”.Truehl also recently joined the Forbes Business Council as a contributor and business consultant.

Truehl and his team have received more than 50 ‘Projects of Distinction’ awards from ABC Wisconsin since 2015 and have become the most awarded contractor in the state of Wisconsin, with literally dozens of “contractor of the year” designations, and were recently named one of the “Fifty Most Admired Companies to Watch in 2022” by CIO Bulletin.

When it comes to the future, Friede & Associates is totally in a growth mode. While other contractors reduced their sales and marketing budgets during the pandemic, Truehl and his team went against the grain and opened a new office in Madison and added sales and marketing staff. This investment was well worth the risk as the firm is now being asked to participate in dozens of projects that it would not have been aware of if the leadership hadn’t increased its emphasis in the Madison marketplace.

With a great staff and innovative leadership, Friede is poised for continued success, and you bet that Truehl will keep challenging “the way we’ve always done it” for both Friede & Associates and the construction industry in general.

Sezer Ozmutlu: Changing the World of Aviation for Better