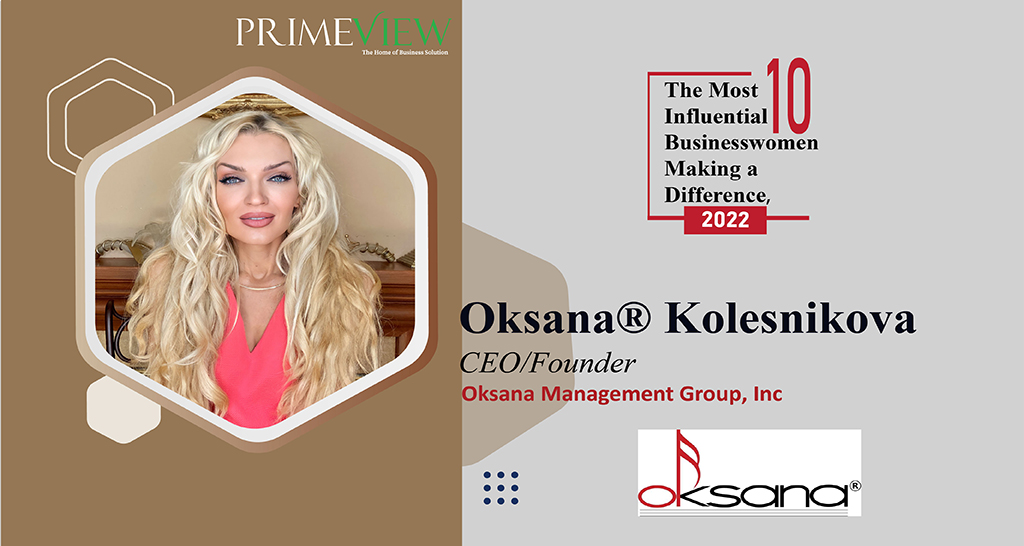 Inspirational and Visionary! These are the two words that are enough to describe the elegant Russian-born American Oksana Kolesnikova. She is a renowned pianist and composer, educator, and personal mentor to the franchise owners of Oksana Enrichment Programs. Oksana is the CEO of three companies named Oksana Management Group, Inc. (OMG, Inc.), Oksana Enrichment Programs, and Oksana Foundation. In 2019 Oksana launched franchising opportunities for her scholastic and arts-focused business, which was already successfully operating with multiple instructors and was established in multiple schools in Southern California.

Oksana was born in Siberia, Russia, and immigrated to the US during the fall of the Soviet Union in her early teens. Her passion has always been music and she pursued her passion by studying music on scholarship first at Saint Petersburg College, and later at Florida State University. Oksana met her husband, Alex, while attending FSU, and he became Oksana’s music manager and business partner. After her graduation, she embarked on the journey as a performing artist, touring the US and abroad, sharing her music with audiences across the world. Oksana also entertained U.S. troops through MWR in Europe and Asia along with United Nations officials.

After moving to LA from Florida, she landed a position as an in-house pianist at the legendary Polo Lounge in Beverly Hills, the place patronized by celebrities, world leaders, and business moguls, people that Oksana used to see only on TV only growing up in Russia. At that point, the new chapter of her life had begun and she started transitioning from being a performing artist to becoming a businesswoman.

She says, “During my 7-year tenure at the Polo Lounge, I gradually started building my business, first as a piano studio, mainly with my clients who were celebrities, their kids and friends they would refer, and later expanded to opening Oksana School of Music that included not only piano but other instruments such as guitar, singing, violin, drums, etc, the place where I was teaching alongside with the roster of other instructors that I hired and who specialized in their instruments.” Later by 2010, Oksana opened her 1st corporation Oksana Management Group. At this point, Oksana and her company grew to include not only music but also foreign languages and academic tutoring.

Oksana has also recorded eight CDs of original, classical, and popular music and her instructional video for students of piano. Her “Free Floating” CD won the 2010 Best Classical Album of the Year on SoloPiano.com. Over the years, Oksana has collaborated with many international musical artists for recordings, and her original compositions have been chosen by many international artists to record on their CDs. Her CD, “Best of Two Worlds,” evolved from a collaboration with notable fine artist Jim Warren. “Oksanabella,” her YouTube channel featuring her performances, has over 3 million upload views from all over the world.

Twelve years after opening the Oksana Management Group, the organization has expanded to provide not only Music (piano, singing, guitar, violin), K-12 All subject Academic Tutoring, Foreign Languages (Italian, Spanish, French, Chinese), but also other popular after school enrichment programs such as Chess, Acting/Drama, Animation, Painting/Drawing, Cooking classes, Financial Literacy for children and teens, Science and more. The organization currently provides its services not only to its private clients but also to schools (private, charter, public), School Districts, Municipalities, and Counties.

Oksana Management Group reached such an expansion that it decided to Franchise in 2019 through Oksana Franchising International, dba Oksana Enrichment. Now Oksana Franchises are currently being awarded in 35 states and duplicating its success in different communities across the US, allowing other entrepreneurs to succeed in this industry.

It’s all About Discovering Passion

Oksana was lucky to discover her passions early on, which are music, children, and education. She is so much in love with what she does, that she doesn’t even consider it “work” in a traditional sense. Oksana is consumed by her mission from the moment she wakes up to the time she goes to bed. Oksana lives and breathes the legacy she is creating.

Like all businesses, Oksana Management Group, Inc was also hit hard by the pandemic. Oksana says, “You see, as a performing artist, for so many years, I have been performing at countless charitable and Fundraiser events, and every time I had a dream to someday create my charitable Foundation. Well, the day has come when we found ourselves in the unprecedented times of this pandemic. The Oksana Foundation 501c3 was born with a mission and the goal of providing educational opportunities to the underprivileged youth completely free of charge.” Since the launch of the Oksana Foundation, the organization has helped countless youth enjoy free classes, especially when it learned that children were locked down during the pandemic faced dealing with its harsh realities. The Foundation’s programs brought them purpose, productiveness, new skill exploration, and prevented them from being bored by doing something creative. Currently, it is bringing additional programs to reach more and more youth across different communities.

Oksana thinks her biggest achievement by far is contributing and giving back to the community through her Oksana Foundation and helping youth. Her brand, Oksana School of Music was awarded the Best of Beverly Hills award in 2014. CBS recognized her as the “Woman of the Week” and she was awarded the Best Classical Album award by SoloPiano Radio Station for her CD “Free Floating”.

Through her dedication to youth, Oksana has branched into philanthropy with Oksana Foundation, a non-profit organization that provides educational opportunities to underprivileged youth. “There are many children who are at a disadvantage and now I can finally give back and help them to succeed in giving them the opportunities and tools to better themselves. I am excited to make a positive change in people’s lives and look forward to doing so for years to come.”

“I wouldn’t be where I’m today if it was not driven by my passion for work that I do. But everyone that I met along the way on my exciting and meaningful journey, had a special place in my heart and shaped me into who I am today. Even the naysayers had their place, as I always enjoyed proving them wrong. All I can say is that success is the best revenge!” – She adds.

When we requested Oksana for her important advice for aspiring entrepreneurs she says, “Never give up in the face of challenges and adversity. Strength and resilience come as the skill you acquire along the way. And with this skill, you can conquer the world! Cheers to all you successful, resilient, and strong female entrepreneurs in the making!”

The Road to Future

Oksana’s goal is to grow Oksana Foundation and for it to become a globally recognized brand name. Where not only local but international communities and world youth can benefit from her organization’s efforts. She feels blessed to have a great team in place and she does not doubt that Oksana Foundation will achieve its goals and do its part to make the world a better place to live in.