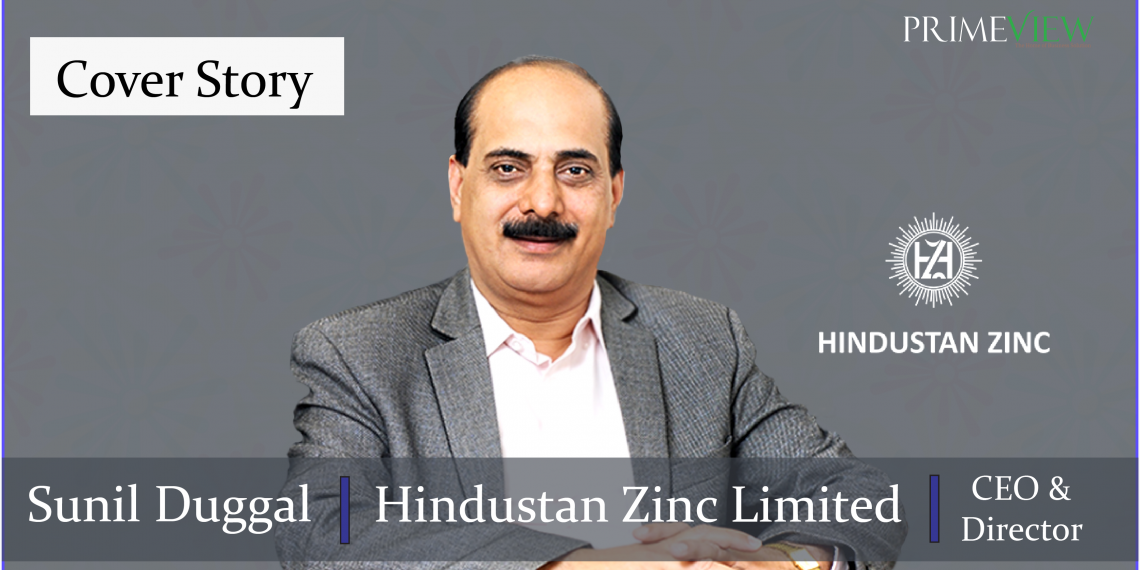 It has been truly said that the passion for entrepreneurship is unravelled when it is manoeuvred by a desire for the welfare of the society and nation. A strong determination of the country’s development paved way for the foundation of Hindustan Zinc, which, today, is India’s only and one of World’s leading integrated producers of Zinc, Lead, and Silver, with a production capacity of about 1.2 million tonnes.

Incorporated in 1966, Hindustan Zinc sits on top of the industry for its tier-1 assets and high quality products. A Vedanta Group Company, Hindustan Zinc is headquartered in Udaipur in the State of Rajasthan where it has its Zinc-Lead mines and smelting complexes. As one of the pioneers in this space, the company leaves an indelible mark by providing Zinc sufficiency to the nation and representing India in the global Zinc, Lead and Silver market. It governs about 80% of the growing Zinc market in India and produces almost 100% of India’s integrated Silver.

CEO & Whole-time Director of Hindustan Zinc Limited, Sunil Duggal is a result-oriented professional with over 35 years of extensive experience in leading high-performance teams and 20+ years in leadership positions.

The Echoing of HZL’s Excellence (The Journey)

The journey from 1966 to 1999 had laid the foundation of mechanised Zinc-Lead mining and smelting in India. As the world was moving ahead in production and capacities, it was time for the government to look for disinvestment in public sector units which had the potential to grow further but were lacking due to funds and resources.

Hindustan Zinc mines are expanding enormously and expected to reach 1.2 million tonnes of mined metal capacity in the imminent future. Its underground production shafts at Sindesar Khurd mine and Rampura Agucha were commissioned recently. Further, further expansion to 1.35 million tonnes per annum is under planning stages.

The Company has recently set up two new mills at their operations in Zawar Mines and Sindesar Khurd Mine, with a joint capacity of 3.5 million tonnes of ore-treatment, increasing its total milling capacity to over 17 million tonnes per annum.

To increase metal production through the recovery process, Hindustan Zinc is also setting-up Fumer Plants, of which the first one will be commissioned in FY2020. This will help in the recovery of metals from smelter waste – particularly Lead and Silver.

As per World Silver Survey 2019 by The Silver Institute, Hindustan Zinc is now the 9th largest silver producer in the world. The Company has increased its production of Silver manifold in the last fifteen years from 41 tonnes in FY 2002 to 679 tonnes in FY 2019 and plans to take it to 1000 tonnes.

Zinc is majorly used as a raw material that finds its applications in structures, sheets, sanitary wares, decoratives, chemicals, oxides, dust, wires, etc. To meet the dynamic needs of the industry and be more customer-centric, Hindustan Zinc has always been ready for any kind of collaboration and knowledge sharing exercise that creates a win-win situation for both parties, which is unique and differentiates it from its competitors.

In the past, they have collaborated with their customers to develop new value-added products to increase productivity and yield, reduce wastage created due to re-processing & overall carbon footprint which is aligned with the group philosophy of developing sustainable business models which are environment-friendly

“At HZL, we give highest priority to the safety of our people and the conservation of scarce natural resources through technology and innovation”

A Glimpse of Indian Mining Sector

Over the last decade, the contribution of the Indian mining sector to India’s GDP has not been more than 3 percent. The mining sector aims to contribute 7-8 percent to the GDP, which could create around 25 million jobs in the country, directly and indirectly and has the potential to propel GDP growth to more than 9 percent.

Thanks to the technological revolution, the nature of mining is constantly shifting. Most of the mines in India are open-pit mines, but the transition to underground mining is around the corner. There is a need for a huge amount of metals and minerals to support the country’s sustained growth in the infrastructure sector, the automotive sector, and power production. With mines going deeper, it is always easier said than done. The need of the hour is not only mining but mining with better safety, cost and in a sustainable manner.

Rightly, underground mines in India are focused on the increased use of technology, skill up-gradation to adapt to these technologies for increased efficiency & productivity and minimizing the cost to gain competitive advantage. With the government giving the push in the right direction by granting leases for a longer duration, allowing 100% FDI under the automatic route (non-fuel and non-atomic minerals), greater transparency in government policies and low custom duty on capital equipment, the current scenario is immensely positive.

Creativity and Innovation in the Workspace

Hindustan Zinc encourages its employees in visits to benchmark operations & exposure to benchmark practices. There is so much happening around, so much to learn, they strive to give their employees exposure to these happenings. This exudes confidence in their employees, supports them in trying new things and encourages them to make decisions independently. These things bring long-lasting creativity and innovation at HZL.

Through regular customer engagements with senior management, the team is always connected with customers to get feedback, which is rigorously incorporated to provide better services. Through their associations with global bodies, they facilitate visits of internationally recognized industry experts in their customers’ facility to understand their process and suggest the best in class technology, right product and process to improve efficiency & reduce costs.

Hindustan Zinc has invested a wide distribution infrastructure to be reliable in the delivery and is strategically have a point of sales in all major steel and zinc industrial clusters in India which reduces the inventory carrying cost and lead time forcustomers. They have also invested in developing value-added product capacities to provide “One-stop Zinc Solution” to customers so as to build a long term relationship.

Hindustan Zinc is a technology and innovation-focused company with digitized end-to-end customer service right from the order placement, real-time tracking of shipments, payments, grievance redressal, etc. It is in phase to develop its e-commerce portal as they want to change the traditional way of selling metals and incorporate the best practices that are being used in other industries.

“Future of the company and most importantly the industry is bright for sure. We are a growing nation, our needs are growing, and we aspire to become a $5 trillion economy by 2025. To realize this, we need a lot of infrastructure and rightly so, the government has already made big plans for infrastructure growth. It intends to spend 100 lakh crores over the next 5 years on rural, social and industrial infrastructure,” Sunil Duggal explains.

“This will create a huge demand for so many commodities including metals & minerals and no single company can absorb all the demand. No one could have imagined a better scenario than this for the industry,” he further adds.
“At HZL, we give the highest priority to the safety of our people and the conservation of scarce natural resources through technology and innovation.” – Sunil Duggal

Hindustan Zinc is India’s largest and world’s leading zinc-lead miner. With more than 50 years of operational experience, it currently holds about 80% of market share in India’s primary zinc industry and is among the Top 10 silver producers globally with an annual capacity of 800 MT. Currently, Sunil Duggal is leading the company as CEO and taking it on higher latitude.