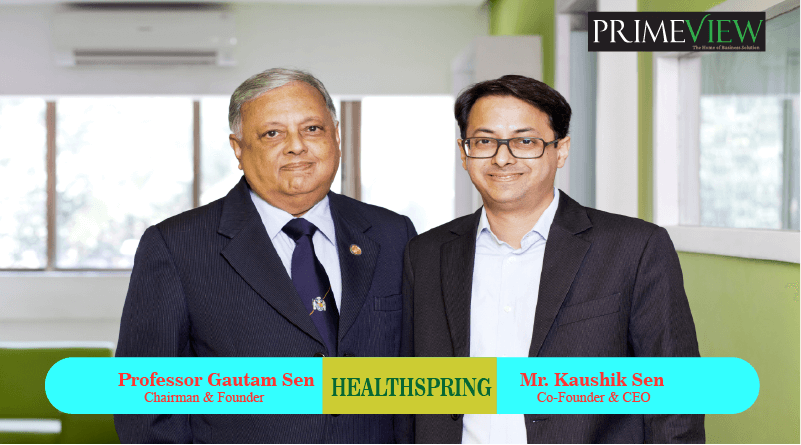 Healthspring is a pioneer in the integrated primary care model and has developed a chain of neighbourhood clinics that deliver world-class tech-enabled high quality care and operates a network of 25 clinics across Mumbai & Pune. The firm also provides pan-India Corporate and Occupational health solutions to leading companies and has 90 such centres across the country which includes Factories, Mines and their townships along with Off-Shore and In-shore Drilling Platforms. Healthspring has provided comprehensive primary care (family medicine) to more than 8 lakhs.

In the Pursuit of Serving the Client better

Healthspring has built a brand by meeting unmet needs in the consumer space – from safe, modern and world-class facilities, to providing all required consumer primary care needs under one roof including, doctor consultations, pathology, dental, diet, physiotherapy, home care, pharmacy & emergency services ensuring a high level of customer service and receiving customer feedback based on Net Promoter Score, a key metric in all decisions. Healthspring follows P4 medicine- Predictive, Preventive, Participatory and Personalized Care, which has been recognized world over as the best way to drive better health outcomes. Most importantly, Healthspring has built trust with consumers by staying true to its values and creating an ethical, honest system (no referral fees, full-time doctors dedicated to personalised patient care).

Healthspring has won numerous national and international awards including the prestigious Healthcare Business International award and Frost & Sullivan award. Healthspring was founded with a vision of transforming India’s health delivery system where it matters most – at the entry level of care, or “Primary Care”. Primary Care encompasses a very large area in pre-hospital healthcare delivery, ranging from care at home to responding to day-to-day health care needs, acute and chronic illnesses as well as emergency medical situations. Primary care has the potential to significantly improve health outcomes by keeping people healthier and out of the hospital, and reducing unnecessary testing and hospitalizations.

The Experts in the Field

Prof. Dr. Gautam Sen is the Chairman & Founder of Healthspring. He grew up in a small sub-divisional
town in Maharashtra, where his father was a legendary surgeon. He studied in Marathi medium, until doing his MBBS and MS in Mumbai, at Grant Medical. He holds a Fellow of the Royal College of Surgeons (FRCS), Edinburgh, one of the most prestigious postgraduate medical colleges in the world, and is one of the very few people globally to hold an honorary FRCS from the Royal College of Surgeons, Glasgow.

Besides his medical practice and teaching, he has also been a pioneer and path-breaker in shaping positive developments.

He is also passionate about reforming medical practice and education in India, and besides the positions
above, has the honour to be:

He has received numerous awards, including:

Mr. Kaushik Sen is the CEO & Co-founder of Healthspring, Family Health Experts. He started Healthspring in 2010 along with Dr. Gautam Sen. Kaushik previously worked with management consulting firm Bain & Co. in Boston, Singapore and Delhi for over 11 years. At Bain, Kaushik worked extensively in Healthcare (Hospitals, pharma and medical devices) and Private Equity. When Bain opened an India office in 2005, he was an instrumental member in establishing the office. In 2009, he left Bain to start Healthspring. Kaushik has a B.A. (Economics and Mathematics) from Colby College, and an MBA from the Harvard Business School. He is passionate about reforming the healthcare system in India, and providing consumers with a high quality service and ethical option. Kaushik is a Salzburg Global Fellow and was selected by the Economic Times as one of India’s top 40 Young Business Leaders in 2017. He plays a key role in various industry bodies in Healthcare and Health Insurance, and has been a featured speaker in International and national conferences.

Healthspring has received several National & International Awards & Recognitions since its inception such as:

The Best Service provider in the Healthcare Industry

Healthspring has established many “firsts” in the healthcare delivery in our country. Some of the firsts include:

The Role Played by 75Health EHR in the Modern Healthcare Ecosystem

Fidesto: A Promise that lasts from Conception to Handover