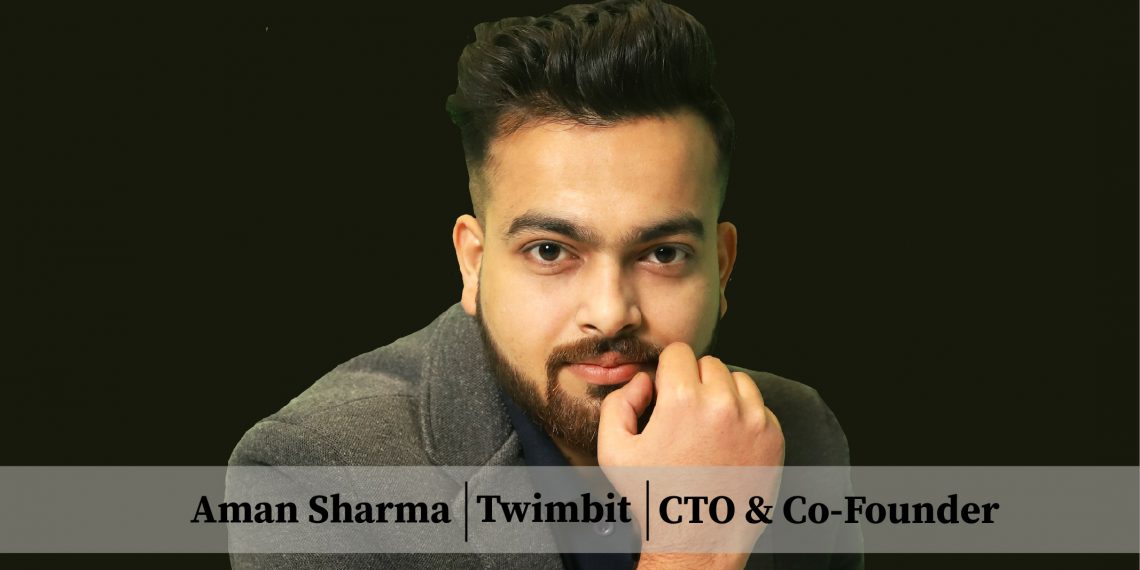 Twimbit is spearheading forward under the dynamic leadership of 23-year-old technocrat Aman Sharma. the Singapore-based start-up has a unique vision – the company wants to simplify research and empower businesses and individuals alike with their power-packed bite-sized info. Aman understands what it takes to lead a tech start-up – product development, scaling it up to millions of users and everything in between. On the same front, he knows that change is very much needed in research delivery and is able to apply his expertise on the way research is produced, personalized, and consumed.

Regular 12-year-olds were usually engrossed with evening cricket games, but not Aman. He was busy figuring out coding. Love would be an understatement for his passion for tech, as he started coding at an incredibly young age. Finances were tight, and he did not have computer access at home. In spite of that curveball, Aman chose to utilize his free periods in school at the computer lab. Within the fascinating world of computers, Aman learnt modern technologies and coding techniques. His teachers Mrs Shallu Kapoor and Mrs Nirmal Sawhney, as well as principal Dr Renu Gupta, saw that this young boy had a mind that didn’t want to be idle but was finding its purpose in something specific. He was gifted in coding and wanted to put his skillset to full use.

Being a kid with special privileges in school played into his cards, as Aman placed his focus on both education and practiced real-world issues. While he was initially disappointed that he did not make it into IIT due to personal reasons, he persevered and found an alternate pathway via a BIT Mesra scholarship program.

While undergoing his second semester, Aman was offered the opportunity to work in Egypt with an NGO as a web operations manager. His next stepping-stone was a break with an Italian web company. Aman hustled on the side to get extra income and was always trying his hand at any new tech he came across. The result of his efforts bore fruit with his brainchild, Atlancey. The private web services provider thrived into a profit-making venture with 15 team members working together and holding the fort.

Aman moved onto new grounds as an AI engineer for Exclusivi, an AI company giant for European hotels. He was attached to Exclusivi for two years and learnt about consumer product and start-up establishment with CEO Babis Kourtzis. Upon completing his engineering degree, Aman joined KiEvents, an Indian events AI start-up, to win the Startup India Most Innovative Startup award.

It was at this juncture that Aman began providing prototyping and web services to Twimbit. As they did not have a tech team, the company heads nudged him to come on board as the Chief Technology Officer. Today, he stands as a Co-Founder too.

Twimbit aims to disrupt the research industry. Its whole idea of existence rides on bringing joy to the discovery and consumption of research. The idea is more challenging than it shows, as its base is a complicated engineering problem, one which has never been tried on previously. On most days, the tech team is experimenting and bringing new stuff to its research insights process. One inside news Aman shares is that they are bringing something unprecedented to the field, something that will make research accessible and available on the mainstream for everyone to discover.

When asked about the organization’s diversified offerings, Aman shared his thoughts on his work process:

“To be blunt, I don’t have much industry experience. This so-called lack actually gives me an edge over
my senior colleagues. I think and understand everything from ground zero and an outsider’s perspective. I will then gradually build my knowledge and understanding around it. My motto is simple – Create products that users will love and the business will follow. I experiment with ways to disrupt the long-running processes and find new capabilities for automation and digitalization. When you focus on the process and make it better, the outcome is the polished gem.”

The CTO leader shares his fresh outlook on leadership principles:

DEALING WITH THE CHALLENGES CONFIDENTLY

Challenges require motivation and reflection, as mentioned by Aman:

“Over the years, I worked on myself daily with help from Ashish Passi (our COO), my teammates, lots and lots of books, and conversations with leaders. This role is an exciting journey, and I am proud to say that I have improved. I am now better prepared for any challenge. If I am not, I am confident that the people around me will help me out. The best way to face any challenge is simply this – Take a deep breath, recollect everything you know, talk it out with someone, execute and wait patiently for the results. Enjoy the process – that’s the most important thing,” shared Aman.

Failure is part of life and should not be looked at negatively. Aman shares his viewpoint on failure and how he flipped it into a learning curve:

Every day, we fail, learn, and celebrate in this game of life. We asked Aman to pick his biggest failure.

In his opinion, it was how he managed KiEvents, the second start-up. To nail down the challenges, these included the lack of proper idea execution, inability to device a product-market fit, a vague action plan and being unable to forge a great team. These factors resulted in a failed business, and he has learnt a great deal from them. Aman is now better at people management, scouting for new talent and strategizing his action plans.

Aman expresses his opinion on show success looks like:

He says that he cannot pin down an exact definition of success. The path to success is fluid. With that being said, Aman is afraid of settling. He feels that not having a proper success definition is what incites him to move ahead.

The techno-holic defines timed outcomes and uses that scale to measure his success – he has timelines in place for days, months and even the full year. These structured timelines guide Aman on where he is headed and allows him space to navigate as changes come along.

When the target is in place, Aman works for full days and most nights and is bent on accomplishment, which can sometimes run into weeks with little sleep.

However, when the goal is attained, he celebrates and relinquishes himself into full party mode until the time comes to get fixated on the next milestone.

For now, Aman says that success would be to get Twimbit connected to a million users.

Aman shares his thoughts on his greatest accomplishment:

“For me, remarkable accomplishments come in the simplest of things. When I was a kid, I might have been confused about what I was going to be. However, when I solve some exceptional problems today and am able to execute groundbreaking innovations, I know that I am exactly where I was meant to be. I consider this to be my greatest achievement. Each day well spent is in itself an accomplishment too.

The past couple of years have been fortunate to me, too, as I bagged the “Startup Asia Award” and the “Top 10 Most Inspiring CTOs in India” award. Above all, I feel lucky to be in a spot where amazing people surround me – this ranges from our engineering team, research team to my fellow co-founders.”

Aman specifies his life vision in one power-packed sentence:

Solve the humanities problem by creating technology and products that people love.

Words of wisdom that are true to the core:
Stop following what you want to have and follow the process behind it with a pinch of patience. Success will tag along eventually. As an example, if you want to become rich, don’t follow the money trail. Put the best business process into execution instead, and the money will come flowing in.

As far as new ideas go:
Aman is striving hard to build a world-class engineering team at Twimbit. With the best individuals onboard, he believes that the aftereffects will positively impact the research industry. Instead of viewing research and tech as two separate things, he wants to merge onto an innovation paradigm.

MAJOR CHARACTERISTICS OF A LEADER

Leadership is no longer about an old-worldly system, and Aman puts it aptly:
leader should be people-friendly! He should have an approachable nature. No one should fear a leader, who in turn, shares everything yet simultaneously builds an environment for innovation and relentless work ethics.