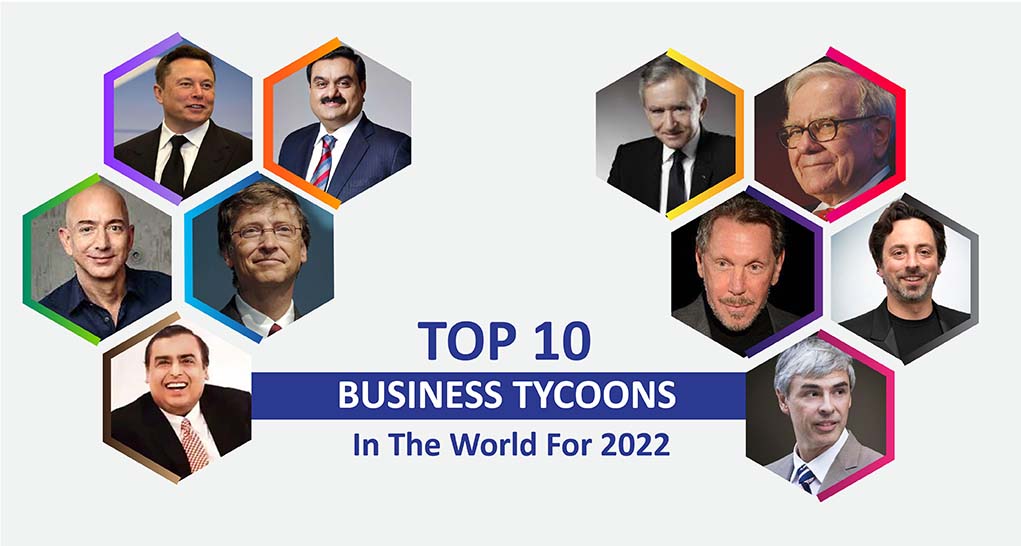 Determination with passion is the secret behind the success of the wealthiest business personalities in the world today. They inspire us with their success and leave triumph behind to follow other passionate people who aspire to be business tycoons. Their success is not a one-night story they were also going through a thousand failures, defeats, and trials, which is the backbone of their destiny. Sometimes we don’t see the backstage struggle and their existence in difficult times. These are the things that support them in reaching their goals. Let us look into the journey of some famous business tycoons.

Elon Musk is the richest person in the world today. His net worth is about $271 Billion in June 2022. Elon is most passionate and ambitious about his work. He serves as the Chief Engineer and CEO of SpaceX. And he is the largest shareholder of the Paypal company. He is a physics student in his academic year, he has a lot of interest in space-related concepts and calculations. He is the founder of Tesla, one of the most famous EV brands globally. Elon musk is also a successful investor and entrepreneur in the world, his investing tricks become famous on social media sometimes. He believes that the future of energy is sustainable and clean energy.

Gautam Adani is a famous Indian billionaire with a net worth of about $155 Billion which brings his name to the list of the world’s richest persons. He is a founder of the Adani group starting his business in Ahmedabad, Gujarat. He started his enterprise in almost every possible industry like solar industry, green energy, gas, and airports which creates India’s largest business group.

Bernard Arnault is a famous name among the business tycoons in the world. He is known as a French business magnate in the world. He is a successful investor and CEO of the world’s largest luxury and goods company. He worked as a real estate developer in his youth. Group Arnault was also established by him. His net worth is about $153 Billion.

If you see a challenge as an opportunity, then it won’t take time to become your victory. I think this is nearly applicable to the journey of Jeff Bezos. He founded a huge E-commerce company called Amazon which shook the business world and brought one of the biggest revolutionary changes in each industry. Jeff is a leading American investor, media proprietor, and also commercial astronaut. One thing we can acquire from Jeff Bezos is to recognize the need and wants of people in the market and work on them. His net worth is about $142 Billion.

Bill Gates is a software developer and co-founder of Milestone in software companies known as Microsoft. He is a software engineer student at university and an investor at a young age, and he is a billionaire at the age of 21. His infinite love is in reading books. One thing we can learn from him is how rich we are; social awareness is the most important thing. Bill gates donate billions in charity work. His net worth is about $105 Billion.

Larry Ellison is an American business magnate who is an investor, CEO, and co-founder of Oracle Corporation. His net worth in 2022 is about $94 Billion. Under his leadership, Oracle Corporation achieve success in business and is the largest supplier of database company in the world. He is one of the top entrepreneurs in the world today.

Warren Buffett is the most successful among the investors in the world. He bought his first stock as an investor when he is 11 years old. Incredible achievements in the investment journey made him the world’s largest investor. His net worth is $97 Billion making him the world’s richest person and investor. Early starting and Consistency are the keys to investing, which we can get from Warren Buffett.

Mukesh Ambani is the richest personality in Indian business. He is the Managing director of Reliance company founded by his father Dhirubhai Ambani. He made his position in industries like petroleum, aerospace, green energy, and electronics which turned his business to grow at a high level. Mukesh Ambani started a Telecom company which is one of the largest profit and growth of the Reliance company. His net worth is about $90 Billion.

Larry Page is a leading business tycoon, entrepreneur, Co-founder of Alphabet company, an early investor, and a well-known American computer scientist. Alphabet is the collection of many multinational companies like google. An innovative mind is the unique quality of Larry’s page. He has a net worth of about $86 Billion.

Sergey Brin is a computer scientist, American business magnate, internet entrepreneur, and one of the business tycoons in the world. He co-founded Google with Larry Page. And he is also president of Alphabet, the parent company of google. About $82 Billion is his net worth in 2022.

Definition of success we can only define when we will achieve it. These famous business tycoons achieve their goals only by hard work and great passion for their work. One thing we can learn from them is to do your every little work with compassion. Build leadership personality in you, and be curious about each thing in your work that forces you to generate innovative thoughts and new inventions.