Home The 10 Most Impactful Women in Technology 2022_Article 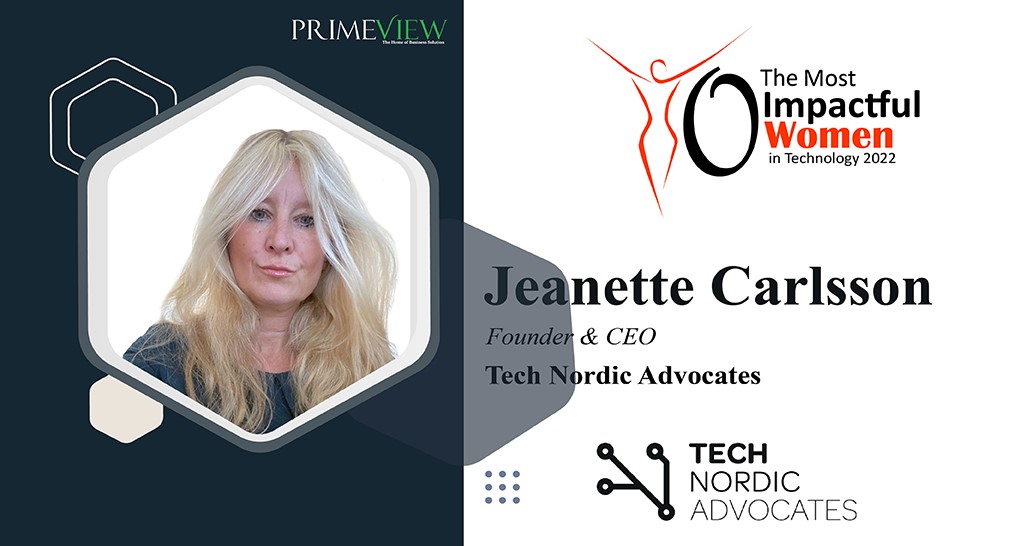 A Computer Weekly magazine survey in 2022, revealed that 44% of tech workers believe it’s not important for men to be involved in integrating women into tech teams. It not only revealed a prevailing attitude within the notoriously homogenous sector but also underlines the urgent need for change. And it was precisely that need that persuaded Jeanette Carlsson to develop, launch and lead Europe’s only international growth program for female tech founders and leaders, within Tech Nordic Advocates (TNA), Northern Europe’s largest tech/startup ecosystem and women-in-tech network.

TNA is the Nordic & Baltic sibling of Tech London Advocates engine of London’s tech ecosystem and the Nordic arm of the worldwide Global Tech Advocates network that spans 25 global tech hubs and over 25,000 tech leaders.

In 2012, serial entrepreneur Russ Shaw CBE had formed Tech London Advocates to champion London as a global tech hub and address some of the biggest challenges facing UK tech companies, a major one being its lack of diversity. The potential for the network to grow was clear so two years in, one of his first calls was to kindred spirit, Jeanette Carlsson. She agreed to form Tech Nordic Advocates (TNA), and in little over six years, she has built Northern Europe’s largest and only pan-Nordic/Baltic tech leader and women-in-tech network, comprising start-up/scale-up founders, tech entrepreneurs, investors, lawyers, mentors, accelerators, corporate leaders and policy makers.

With a mission to be the leading driving force and platform for Nordic/Baltic tech/start-up ecosystem collaboration and growth,Jeanette Carlsson and her team reached out to tech start-up communities across the Nordics and Baltics. The message was that there is a need to join the dots to get things done and work together across borders in a region of small economies that offer limited scale, access to talent, know-how and capital, especially for female founders. She launched her recipe of outcome-focused programs and events, tailored to helping start-ups, scale-ups including under-represented groups in the sector, thrive.

“TNA’s key differentiation is the international component our know-how from global markets and access to top people across the globe,” Jeanette Carlsson says. “With the Nordic and Baltic countries all being small, it’s paramount to get founders thinking globally from the outset. Thinking bigger and moving faster is a core philosophy, ingrained in TNA’s DNA, which reflects from my own 30-year tech leader background in London and globally, says Carlsson. “The mentors and coaches on our programs often need to say to the founders ‘you’ll need to pitch bigger plans and bigger capital needs to investors, including outside this country. It’s easier to be a big fish in a small pond, but if you want to make it, set a vision to be a big fish in the ocean.’ Everything we do is built on that we bring the ocean into the pond.”

It’s not who you are, but what you offer, that matters

That Jeanette Carlsson stresses the international aspect is little surprise. Born in Copenhagen to a Danish mother and Swedish father, with a Nordic/British family and a 30-year career as a tech sector entrepreneur, blue chip corporate tech leader, diplomatic, government EU and board advisor, business school lecturer and keynote speaker in the UK, US, Nordics and across the globe, Carlsson’s mindset is categorically ‘it’s not who you are, what you look like or where you come from but what you offer, that matters. And if you want to make it big, you have to think big.

Her resume spans a raft of high-profile roles with digital and tech as the red thread throughout, starting as an economist at the European Commission in Brussels, to strategy consultant and leader at PwC, then IBM in London. Here, where she was responsible for global, European and UK businesses, including ISVs (Independent Software Vendors), or, in today’s language, start-ups she met Russ Shaw, Founder of Tech London Advocates and Global Tech Advocates and the steppingstone into her London tech start-up roles.

In addition to her roles at the European Commission, Pwc, IBM, diplomatic and board advisor roles, Jeanette Carlsson has played leading roles in UK and US digital and tech sector businesses, founded newmedia2.0, a leading London-based strategy and innovation boutique, lectures in Innovation & Entrepreneurship at universities across the UK, and co-founded a leading digital learning program for young people in London, earning her an Honorary Fellowship. In 2018, when she was on the Connecting London’s tech City Board with Russ Shaw, Carlsson was voted ‘Inspirational Woman’ by the City of London and invited to Buckingham Palace, where she was recognized by Queen Elizabeth for her contribution to London’s tech sector and the promotion of London as Europe’s leading tech hub.

In her personal life, Jeanette Carlsson is a proud mother and hopefully, she says, role model to Laura 23 and Casper 21. It was during her time at Pwc and IBM that the seeds were sown for Carlsson’s relentless drive to improve D+I in tech. As a lone female in a strongly male-dominated environment, she often found herself the only woman in the room and, over the years, increasingly found herself emulating traditionally male communication styles and behaviors and feeling ill-equipped to service and negotiate with typically male-led clients. When IBM aware of the need to address the gender imbalance in the workforce invited her to join a talent program for female IBM leaders, she joined peers with the same experience and learned key skills and tools that helped her navigate the environment. She promised herself that one day when the time was right, she would take similar action. Carlsson notes that while sadly the bigger picture hasn’t improved much since, Tech Nordic Advocates ultimately underlines her determination to improve opportunities for women.

An innovative problem solver and rebel with a cause

Jeanette Carlsson’s rebellious streak helps her break things down, say ‘why not’, when people say no, and shake things up. “What drives me is problem solving and getting things done”. “When I see a problem, I want to fix it. It challenges me intellectually. So I go and find like-minded people who share my drive, vision and passion to solve the problem and make a difference, whether that be through our TNA programs, events or in other ways.”

Redressing the inherent imbalances in the tech sector is the kind of massive challenge that you can’t help feeling is a dream for someone of Jeanette Carlsson’s nature. She approached setting up and growing TNA with the same gusto that she brings to most things in life and the results speak for themselves.

“I lead TNA in the same professional way I lead a commercial business. Clear vision, mission, goals and modus operandi. It makes it very clear for our partners what we stand for and offer, and as a non-profit, it’s easier to work with us.”

Tech Nordic Advocates has already grown beyond expectations, but you get the feeling that with Jeanette Carlsson at the helm, like with the start-ups it’s designed to help out, this is just the beginning.

Geoff Mortimore is a Stockholm-based British freelance journalist. He has written for a raft of UK national newspapers including The Times and The Sunday Times, and US publications including Newsweek. In corporate publishing, he has worked with several international companies such as SAS, IKEA, Volvo and Bosch.