After its riveting success on Disney Kids channels in India, Toonz Media Group has now signed an exclusive deal for Chacha Chaudhary series with Disney+ Hotstar VIP, introducing the most iconic Indian cartoon hero and brand on the OTT platform for the first time.

Meanwhile, the second season of the series will also be aired on the Disney Kids Channels in India, following the exceptional reception garnered from children across the country for Season 1. Production has begun for brand new episodes of the show, which will include 52 episodes of 11 minutes and will be aired across Disney Kids Channels network in India, besides the Disney+ Hotstar VIP platform. 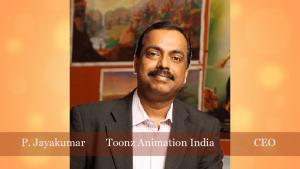 “We are really excited about Chacha Chaudhary boarding the OTT platform for the first time which will give an opportunity for the complete family to relive, entertain and engage with Chacha & Sabu. And to have Disney+ Hotstar VIP as our OTT partner for the series is like the icing on the cake. Toonz’s relationship with Disney goes back many years, and this partnership has reinforced it further,” said P. Jayakumar, CEO of Toonz Media Group.

The quintessentially Indian comic superhero, who has entertained generations of readers, Chacha Chaudhary has been an integral part of India’s pop culture since it was first created by legendary cartoonist Pran Kumar Sharma in 1971. The adaptation of the comic book into an animated series was championed by Toonz, with the vision to develop Chacha as the number one animation IP from India. Season 1 of the series was launched on Disney in June 2019 following an exclusive TV deal with Toonz.

Besides its success on the small screen, Chacha Chaudhary has today grown into a 360 degree brand with more than 500 titles published, 250,000 books sold to date,  comics published in 5 languages, massive exposure through  35 newspapers in ten languages and free E-comics on  Google’s free wifi in 100 railway stations across India in 18 languages. Chacha’s merchandise was released to the young and adults fans earlier this year and the kids merchandise is expected to launch in market by late 2020. Chacha’s core Indian values with mental strength should be good inspiration for kids and whole family at these times.

“Chacha Chaudhary has always been related to solving problems when someone is in trouble. Readers have read and enjoyed its comics since 1960. Toonz has recreated the iconic cartoon in animation. Chacha Chaudhary series being telecasted on Disney+Hotstar OTT platform is a new beginning. Now kids can watch their favourite show anywhere and anytime,” said Nikhil Pran, CEO of Pran’s Features.

Although primarily a nostalgic, growing-up staple for the pre-millennial generation, Toonz has taken special care to make the animated adaptation of Chacha Chaudhary relevant for the millennial audience as well. For this, subtle tweaks were made to the show, like the introduction of a new character – Pappu Pendrive – who is a gadget freak. The highlight of the series, however, remains its focus on the themes of problem solving, adventure, humour and reinforcing the message of good over evil.

About Toonz Media Group – Toonz is a 360-degree media powerhouse with over two decades of unparalleled experience and one of Asia’s most active animation production studios (over 10,000 minutes of 2D and CGI kids and family content per year). Toonz, having worked with many of the leading entertainment studios, channels and networks including Marvel, Nickelodeon, Turner, Disney, Netflix, Dreamworks, Lionsgate, 20th Century Fox, Paramount, Sony, Universal, BBC, Amazon, Google, Hulu, HBO and Exodus Film Group, have over 75 animation and live action series, as well as five feature films to date. Toonz has also recently entered its 3rd feature film partnership with Exodus Film Group on a feature titled “Pierre The Pigeon Hawk” with a voice cast including, Whoopi Goldberg, Kenan Thompson, Howie Mandel and Luis Guzmán.

Pay dues of credit cards of any bank...

Awareness and willingness to buy a 5G Smartphone...

Prime View Magazine showcase the wonderful stories of Founder’s, CEO’s, VP’s, Director’s and business and the unique services offered by them. Our website is one of the best online and digital platform for latest business news information. We are a magazine organization and we have appeared to give fantastic news and branding service to the experts all around the globe. Read More...