Home The 10 Most Innovative Business Women's Revamping the Future, 2022_profile 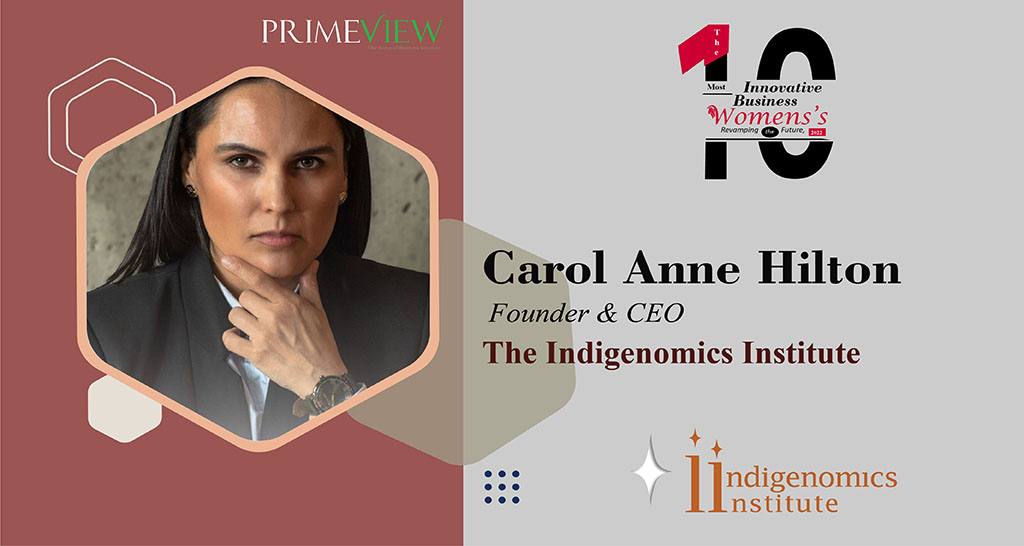 Carol Anne Hilton is the CEO and founder of The Indigenomics Institute and the President of the Global Centre of Indigenomics. She has created a line of thought called #indigenomics, which has grown from a single hashtag to an entire movement that focuses on the rebuilding and strengthening of Indigenous economies. The Indigenomics Institute is an economic advisory for various private sectors, Indigenous communities, and governments. Her work in Canada is driving the narrative of of the 100 billion dollars Indigenous economic target.

Apart from serving as the CEO and founder of the Indigenomics Institute, Carol Anne is also an adjunct professor at the Royal Roads University’s School of Business. She serves as a Director on the BC Digital Supercluster, the McGill University Institute for the Study of Canada, and previously with the Canadian Economic Growth Council, and the BC Emerging Economy Taskforce.

She is a well-recognized, award winning national and international Indigenous business leader, executive adviser, speaker, director and author with an International Master’s Degree in Business Management (MBA) from the University of Hertfordshire, England. Carol Anne is of Nuu Chah Nulth descent and is from the Hesquiaht Nation on Vancouver Island.

‘As the world converges on an economic identity crisis of its own making, the inclusion and re-valuing of Indigenous worldview and knowledge in economy and business are paramount.’– added Carol Anne.

Her leadership principles include holding conversations that matter and removing herself from gossip and negative talk. Carol Anne pays particular attention to her beliefs to identify if they are serving or limiting her.

Raising her daughter as a single mother, while going to school and working is the greatest achievement for Carol Anne. She further describes that creating a word into existence, starting a hashtag, building a business, a brand, and a national and global movement towards a line of thought for inclusion of Indigenous worldview in economics is her greatest career accomplishment.

Carol Anne describes that it takes courage to become an Indigenous entrepreneur. In being an Indigenous leader and entrepreneur, she describes ‘It is important to check your current state of courage, your motivations, energy levels, and inspiration frequently.’ Carol Anne describes success as self-determination in practice. She believes personal success is choosing happiness, choosing freedom, and the ability to choose her own future. For Carol Anne, success means running her own companies and using her creativity to create her dreams into reality.

Carol Anne is committed to increasing the visibility and inclusion of Indigenous businesses and economic growth nationally and internationally. Bringing a vast experience of more than two decades of Indigenous economic design, and business development, Carol Anne is focusing on multi-generational Indigenous wealth creation. The Indigenomics Institute is working to develop an Indigenomics Economic Freedom Index- designed to measure dependency, own-source revenue, and investability in Indigenous economies. With all her expertise, strategic insights, and skills she is now focusing on driving multi-generational impact all over the world through the development of the World Indigenous Economic Forum.

“My vision in life is to live my life as the first generation out of residential school- that how I live matters to my ancestors and my daughter. My vision is to be an Indigenous entrepreneur and stand in my courage, inspiration, power and truth.” Carol Anne Hilton.