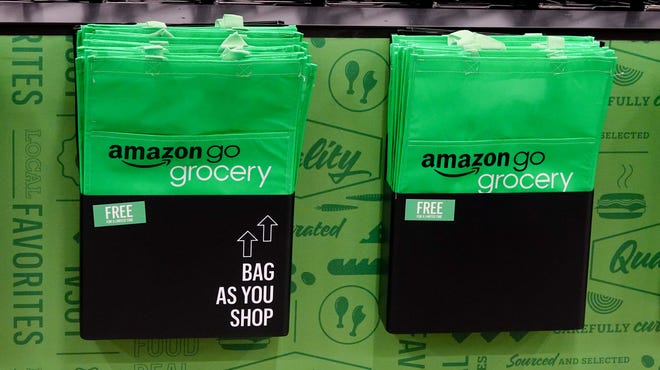 Amazon radical new approach to buying foods and speeding up the checkout process goes the next mile Tuesday, with a full-size grocery store in Seattle.

The Amazon Go Grocery opens with more than four times the space of the original, 7-Eleven-style, on-the-go type stores first opened in 2018. The e-tailer, which also owns Whole Foods, launched the Go stores as a way for local workers to get in and out, with a just basics menu that bypassed essentials like fruit and frozen foods.

With Amazon Go Grocery, the company has reimagined the concept as a store offering pretty much everything you’d see at a local market with local fish and meats, wines and beers, fresh doughnuts and cookies and other staples.

The difference: a way smaller footprint, with 10,000 square feet in Seattle, compared to an average of 50,000 square feet for a local Kroger, says Britain Ladd, a supply-side consultant and former Amazon executive.

Shipping:Amazon is making 100,000 electric delivery vans. Here’s what it looks like

Amazon Go Grocery brings the app-based market experience to a full-service grocery in Seattle
What you won’t hear from Amazon are specifics. Will there be a second Go Grocery store? When will the concept expand to other cities? Will Whole Foods go app and cashless, too? No answers yet to those questions.

The 25 smaller Go stores are currently in areas including Seattle, New York, Chicago and San Francisco.