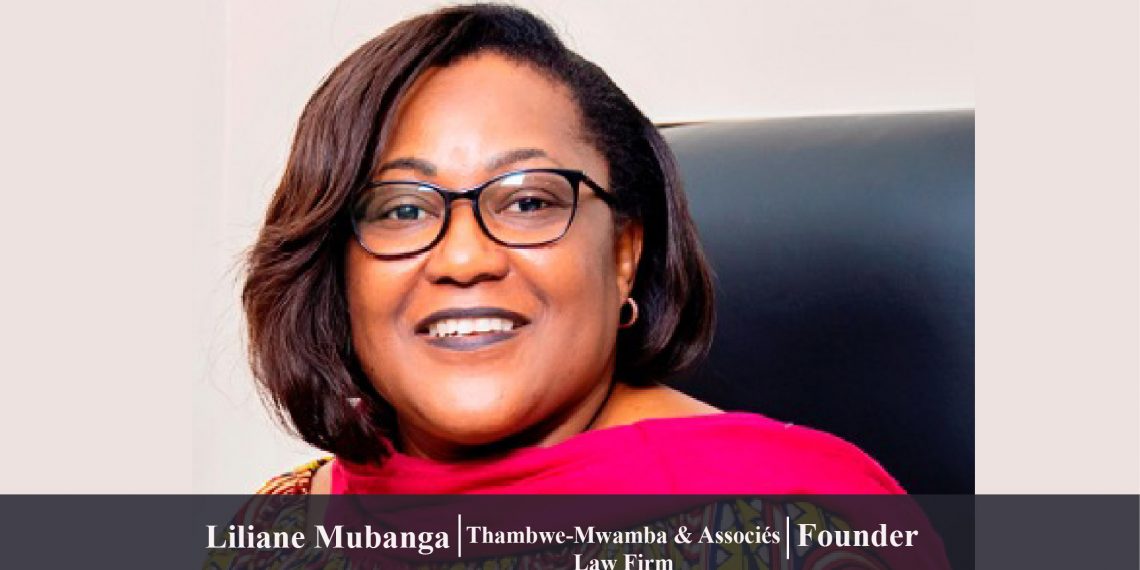 Afierce action-oriented and passionate lawyer, Liliane MUBANGA puts her leader hat on spearheading Thambwe-Mwamba & Associes, a dynamic and progressive law firm based in Kinshasa, capital of the Democratic Republic of Congo. 16 years ago, the optimistic visionary joined Thambwe-Mwamba & Associes as a Senior Executive to help those in need of legal advice on the lines of finding the silver lining in the dark clouds.

Liliane MUBANGA registered at the Bar of Kinshasa/Gombe in the Democratic Republic of Congo and has been a member of the Bar Council of the said Bar for a term of 4 years. She is also the Mining and Quarrying attorney with the senior partner, Maitre Alexis Thambwe-Mwamba. Besides, she has had training in OHADA; Hydrocarbons; Public Procurement; and Insurance, among others. In academics, Liliane Mubanga holds a Degree in Law, with a specialisation in Private and Judicial Law from the University of Lubumbashi, she has completed other trainings for which she is also the holder of a Certificate of speciality in insurance law, a Certificate of competence in oil rent production sharing law and a Master’s degree in International Commercial Law.

Thambwe-Mwamba & Associes emerges as one of the most influential names for legal support. The firm covers legal advice in various areas of law but more particularly, in business (creation of companies, drafting of deeds, special contracts, Due-diligence), Mining, Insurance, Real Estate Development and Management, Real Estate Investments, Labour law (they assist both employers and employees) and also Family law (divorce, succession and filiation).

This professional firm is home to seven expert lawyers and offers integrated services. These seven attorneys bring with them a rich background in different industry verticals. It empowers the team with the adroitness and the expertise to address matters concerning different fields like banking, general trade, construction and hotel industry, mining, and many more.

The proficiency and skilfulness of the team have been entrusted by a large number of people. With its excellent support and legal service, the team stands out among the rest of the players in the markets. Even if Thambwe-Mwamba & Associes remain a human-sized unit in order to better serve the clients.

“Our law firm with a human face combines the ability to imprint a personal mark in the relationship with the client, and the professionalism in the handling of business,” apprised Liliane Mubanga.

“Our commitment to our clients is unique because the client is at the centre of our approach, which consists of getting to know them better, understanding the specific nature of their case, and assessing their needs in order to better assist, advise and guide them”, she further added.

Mindful of the ever-growing complexity of legal matters with the globalisation of markets and business, which require an ever-increasing specialization of lawyers, the members of the firm keep on deepening consistently their knowledge of preferential matters, thus maintaining its multidisciplinary vocation. The synergy of the skills of the members, reinforced by those of external consultants recognized in their specialties, enables the law firm to master a broad range of areas of law.

Reforms by the Government

During the period 2001 to 2014, in addition to the institutional reforms that were undertaken by the governments, these were also supported by economic reforms that had the implementation of the global development goals as their foundation. These reforms were structural and were accompanied by infrastructure programmes, the strengthening of the banking system, the improvement of governance, which led to the reform of state-owned companies, and the liberalisation of the energy and insurance markets.

These liberalizations have led to a change in legislation; in this context, the law firm can cite the mining code in 2001, which has been amended to date, the investment code with the creation of the national agency for the promotion of investments, the law on energy, the hydrocarbons code, the insurance code, the new business law (Ohada law), the law on telecommunications, the law against money laundering and terrorist
financing and the creation of dedicated agencies, the law on subcontracting……;

Hurdles on the Way

There has been a definite impact as a result of changes in legislation, especially on business law; the creation of companies has become flexible; this has encouraged the creation of new companies and a competitive market and net banking has developed following the strengthening of the banking system. After the instability of 2015, there was an economic rebound, good growth with a double-digit growth rate, however,
there was a slowdown following the political instability which calmed down after the elections and the handover of power between the elected president and the outgoing one.
Then came the Covid-19 pandemic which put a damper on things. It is the new challenge for doing business and the traditional challenges of corruption, the development of new solutions, and price stability.
The government is making efforts to ensure that the recovery is effective with or without Covid-19.

A Piece of Advice for Companies

The companies must reinvent themselves and propose new solutions to get out of the pandemic and then, they must take advantage of the legal tools set up in DRC (new laws, liberalization of the economic sectors such as insurances, energy, telecommunications, and new technologies) in a market of more than 80 million consumers and with the presence of country relations. Thus, it is necessary to rethink the implementation of tools to facilitate exchanges; in particular re-launching the chambers of commerce with different countries such as the States of the European Union, Asia (China, Japan, UAE and others), the African countries, the USA, Great Britain.