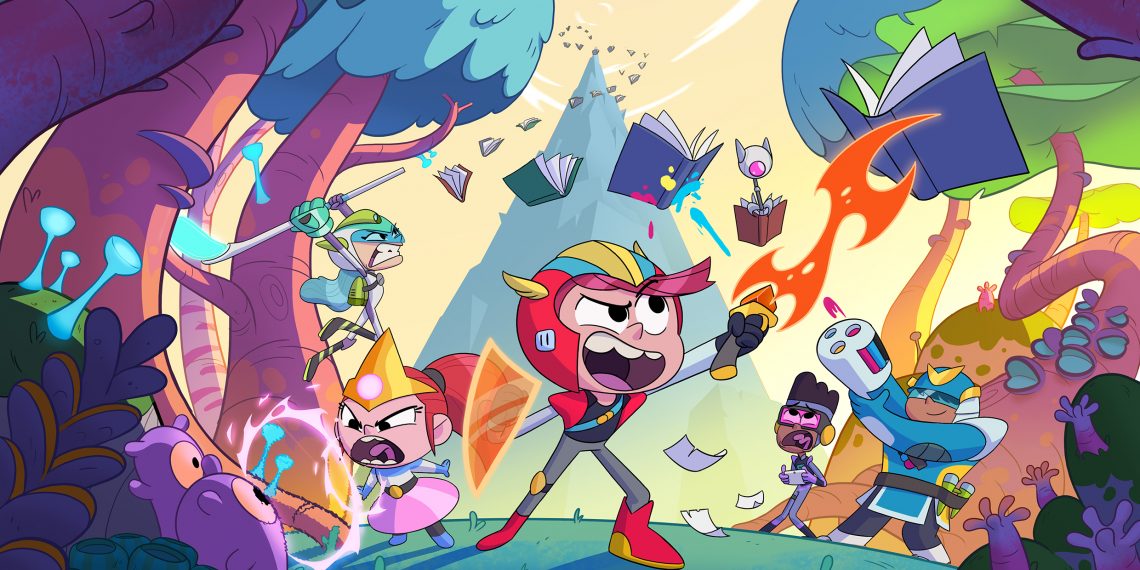 Toonz Media Group joins forces with Ferly for Kingdom of None

Ferly, the Finnish animation, publishing, and licensing studio, announced today that it has signed a co-production deal with global animation studio, Toonz Media Group for its new animation series, Kingdom of None (52×11′).

Aimed at children aged between 5 -8 years, Kingdom of None celebrates kids’ extraordinary imaginations, as well as their ability to discover the playfulness in everyday situations and surroundings and find endless new uses for ordinary objects. The series brings back the joy of children’s play, encouraging kids to create their own worlds, and to find joy in using their imagination.

In the animated series, eight-year-old Meter Masterson, his pals James, Leo and Solo, and his sister Milli race home every day to play in the Masterson Manor backyard. With its interesting places, props and costumes, the imaginary worlds created by Meter and his friends in his garden come to life as the Kingdom of None.

In these worlds they are free to go as far as their imagination takes them. As Meter leads them on journeys through the Kingdom, the ordinary transforms into the extraordinary. Leo’s paintings take on a life of their own, Solo’s trusty hockey stick becomes a magical weapon, and James’ quick thinking helps them battle the fiercest of nemeses. Mowing the lawn turns into a heroic battle and algebra troubles quickly manifest into a mighty quest. From a Viking Lord to a talking tree, Meter and the gang emerge from these adventures with a better understanding of how to navigate the world and the people around them.

Laura Nevanlinna, CEO of Ferly says “When the only limit is your imagination, there is boundless scope for amazing stories in exciting and unique worlds, and the possibility for huge engagement from children. Kingdom of None has brand expansion built into its DNA and as we continue to develop the IP it will offer fans new ways to engage with it from animation to publishing, games to toys. Toonz Media Group is the perfect partner to come on board to make Kingdom of None an international success, and we are looking forward to working together as a team.”[LN1] [HM2]

P. Jayakumar, CEO of Toonz Media Group says “Kingdom of None is a celebration of children’s creativity and imagination. We will be creating a very attractive and aspirational world in the form of the ‘Kingdom’ in this series. It is a very promising project, with tremendous opportunities to explore and we are really looking forward to working on this with the Ferly team.”

The first season of the series is expected to be launched by mid-2023.

Ferly creates extraordinary worlds and tells surprising wonder-filled stories to build brands and IP. Founded in 2017 by former Rovio Executives, its HQ is in Helsinki with teams working in Vancouver, LA and Stockholm.

The Ferly team of animation and brand-building experts specializes in producing beautiful content that captivates and enthrals children and adults alike. To develop stories that are inclusive, representative, and most importantly fun, the global licensing, production and publishing teams work hand-in-hand to create full multimedia franchises for its own and co-produced IP. At the heart of everything it does, Ferly showcases creatives and creators in unusual, unexpected, and wonderful ways to inspire and educate audiences worldwide.

Toonz is a 360-degree media powerhouse with over two decades of unparalleled experience and one of Asia’s most active animation production studios (over 10,000 minutes of 2D and CGI kids and family content per year). Having worked with the world’s leading entertainment studios, channels and networks including Marvel, Nickelodeon, Turner, Disney, Netflix, Dreamworks, Lionsgate, 20th Century Fox, Paramount, Sony, Universal, BBC, Amazon, Google, Hulu, HBO, CMG and Exodus Film Group, Toonz has to its credit several animation and live action series, as well as feature films. Toonz has produced some of the most highly-rated international shows such as Wolverine and The X-men with Marvel, Speedracer Next Generation with Lionsgate, Mostly Ghostly with Universal, Playmobil with Sony, Dragonlance with Paramount Pictures, Freefonix with BBC, Gummybear and Friends and Fruit Ninja with Google and many more. Currently under production at Toonz is Paddypaws and Pals in partnership with celebrated creator Keith Chapman, JG & the BC Kids with renowned American actress Janet Hubert, Sunnyside Billy conceptualized by the legendary Olivier Jean-Marie and Pierre the Pigeon Hawk featuring a star voice-cast of Whoopi Goldberg, Will.i.am, Jennifer Hudson and Snoop Dogg.