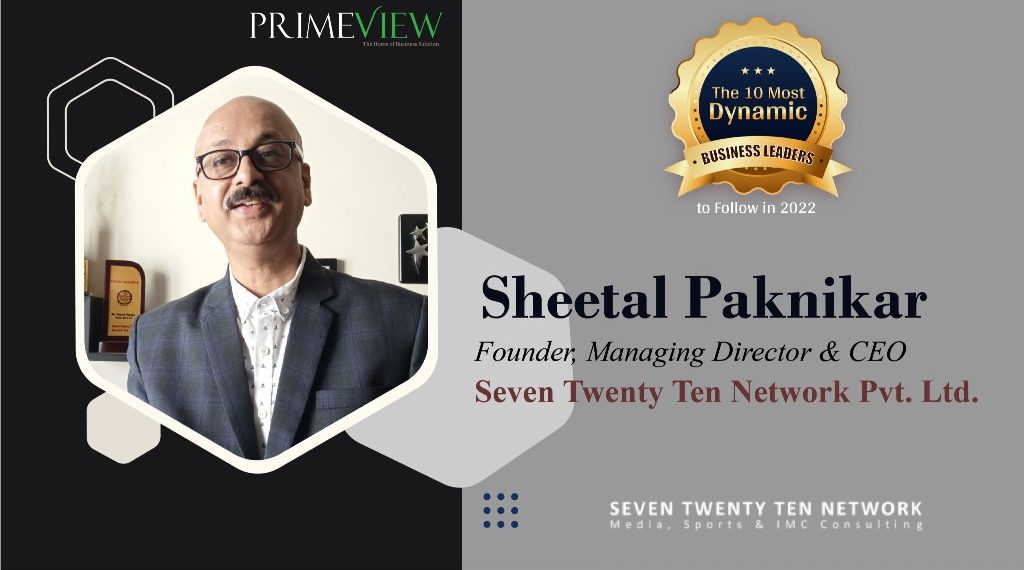 Did you know that 2010 was the breakthrough year for apps like Instagram, Ola, Uber & Quora – to name a few? Apart from these App. launches, 2010 was also the year Time Magazine rated Steve Jobs iPad as one of the Top 50 inventions of that year & Burj Khalifa, the World’s Tallest Building, was formally inaugurated in the first week of January 2010!

Cut to 2022, most of these apps and inventions have changed our lives massively and many of us can’t imagine living without them. In 2010, another company started its journey with a steadfast leader who quietly believed that businesses, like life, should be built on human relationships. A few falls, bruises, pains, and multiple experiences later, Mumbai-based Seven Twenty Ten (7.20.10), a Network of like-minded professionals, is now looking at building on its sound foundation.

When Seven Twenty Ten entered the market during the global recession, they were just one of several other companies that tried to set up businesses but found it challenging to sustain. Yet, it was probably one of the very few organizations that used the market recession to build a then futuristic collaboration based ‘network’ model. This was intelligent innovation, driven by the Founder, who managed to motivate diverse professionals and SME’s to work together.

According to Sheetal, the team take on the traditional ‘Vision-Mission’ Statement, is:

1.To Partner with Clients as Communication Problem Solvers.

6.Lastly, the Seven Twenty Ten Approach is to create a value proposition with every penny/rupee spent, to ensure a mutually rewarding return-on-investment.

The Making of a Steadfast Leader

Armed with two decades of diverse work experience across domains, Sheetal founded Seven Twenty Ten in July 2010 with headquarters in Mumbai and Marketing Associates – largely his personal network, over the world. Having started his professional journey with Amit Khanna and Mahesh Bhatt’s Plus Channel as an Animator, he moved to The Times of India as an Infographic Artist, Graphic Designer & Feature Journalist. Sheetal was then a part of the core team that launched Bombay Times. After working for three years in Publication Design, he joined Ketan Mehta’s Maya Entertainment and was part of the team that launched Maya the Magic Shop, which became one of the pioneers of Animation & VFX in India in the 90s with India’s First Official Sci-Fi Television Series “Captain Vyom”. Later, based on this success, he was the Head of the Animation Team that started the Intel Centre for Advanced Cinematics, which is now the well known brand MAAC. His next assignment was to play a pivotal role in the core content & packaging of B4U Television Network in UK, USA, UAE & India. After 4 successful years in Television, Sheetal’s next project was with Mukta Arts Limited as the Creative Head where he worked on the launch of an International Lifestyle Channel and later with Nagesh Kukunoor on the Critically Acclaimed Iqbal. In 2004, he played his part of the team that saw the launch of Whistling Woods International. Next, he moved into mainstream advertising as the National Creative Director with focus Communication that worked for Brands like Edelweiss, Reid & Taylor, Finolex, Belmonte & Lilliput.

Hailing from a family of educators in Goa, Sheetal is an Applied Art Alumni of Goa College of Art and holds a Master’s Degree in Visual Communication from the Industrial Design Centre at Indian Institute of Technology in Mumbai.

2.Integrated Marketing after analysing the SWOTS of each medium and creatively working out the most effective ways to reach the consumer.

4.End-to-End Solutions from Concepts to Production of Films & Audio Visual

The World is Our Playground

Apart from sustaining a steady growth in the business of Integrated Marketing & Sports Consulting, Sheetal wanted to create a sustainable organizational culture. The idea was to have stakeholders including associates and employees develop a mindset to work for the greater good of society. Seven Twenty Ten was one of the first to think of a collaboration model in 2010, which was ahead of its time. During the first few years, the organization’s target was to create a niche for itself and let the work build the portfolio. Looking at the world as their playground yet staying grounded, the company kept a low-key profile with practically no Marketing and PR. Meanwhile, the organization also tapped unexplored markets like East Africa and Croatia during the early years to build international exposure for the team up skilling.

The Pandemic has actually been a blessing in disguise for the team at Seven Twenty Ten – having enough time to consolidate a purpose driven organisational culture and build trust and bonding within the team. Work wise, it has also helped detail their Dream Sports Project: A Privately Funded Academy of Sport with its International Partners. The Company is currently looking at Investors for the same and hopes to be ready for a soft launch by 2025. After having successfully set up an Academy of Indian Classical Music, the team has decided to use the experience on building AI-driven Edu-Tech Apps that could use academics to solve real life challenges. Sheetal’s future plans include expanding the Seven Twenty Ten footprint across virtual offices & create employment for youth in the next 5-7 years.

“We are just about getting to the end of the pandemic and we are keeping an eye on segments like Travel & Hospitality to return to some normalcy from the later part of 2022. For us as a team, it will be another consolidation year. We are in no hurry!” says Sheetal.

Honestly, it is both a privilege and a little embarrassing to be looked upon as a Leader to be followed but it is no rocket science that a Leader is only as good as his team. In that way, I have been lucky, blessed by professionals & associates who have stuck around with the steadfast belief that we are together to work for the collective benefit & growth for all. Every day begins with an immense sense of gratitude that we are all living a dream to create responsible and accountable leaders for the future.

Sheetal believes that the Pandemic has opened a lot of new avenues in the area of Corporate Social Responsibility. “I feel that Mental Health & Sports should be a Key Area for Corporates to look at putting their CSR Funds to good use. In a way, they are related and essential to our well-being. Add to that India’s highest medal tally in the recently concluded Olympics but for a Country of over 1.3 billion, we must surely look at ways to increase this tally! Our success as a World Beater in Sports like Cricket needs to be studied and see how to develop other sports as well. The policy makers would do well to encourage investors to build sports schools offering a ‘formal’ career for all since it is also related to fitness which has now assumed enough importance in the post COVID world.”

With the multiplying anxiety on the possibilities of lockdowns even in times to come, people around the world have become heavily dependent on technology which has reduced human physical activity to a large extent. There are enough research reports to indicate that mental health and fitness issues, especially in children, are significantly higher than at any time in the past. Once again, Seven Twenty Ten kept ahead of its time and invested in Sports in 2016. For that reason, it is also looking at the future where it wants children to be able to balance their intellectual growth while keeping themselves fit.

Sheetal says, “Digital detox should be given as much importance as digital classrooms. Apart from organisations addressing these as part of new age CSR initiatives, educational institutions will hold the key to make the world a better place for our children.”

Like many organisations, the team at Seven Twenty Ten successfully transitioned to the ‘WFH’ model during the Pandemic. They have arrived at a comfortable off-on line hybrid model and because of a highly aware and sensitive management team; no one from the company has had to look elsewhere for employment. With a steady stream of clients and a stable order book, the highly motivated team of Seven Twenty Ten continue to immerse themselves in up skilling, innovating and going about their business consulting – keeping a watch on time. COVID awareness campaigns, involvement in helping in the Crisis during the second wave and lead generation campaigns for clients to help in their business challenges were what kept the organization motivated during the tough times. Like they say, it is the challenges that are opportunities in disguise, and Sheetal Paknikar & his team at Seven Twenty Ten Network are a prime view of the same.