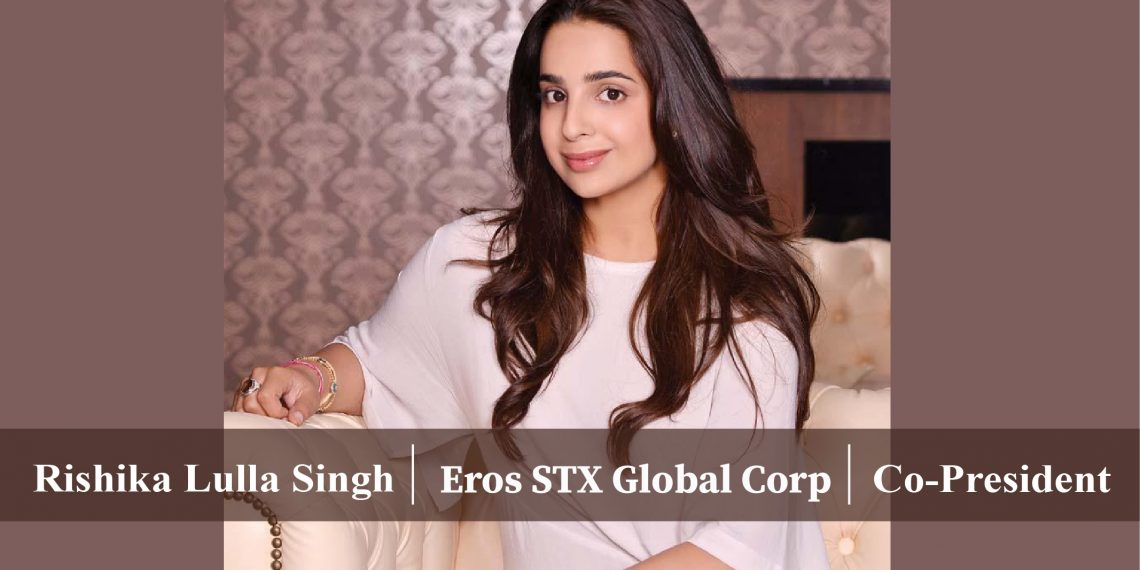 Filled with vigour, creativity, and intentions to serve the world, Rishika Lulla Singh, the Co-President of Eros STX Global Corp is setting a new parameter in the entertainment industry. She is a high achiever and multi-talented, second-generation business leader with a highly evolved knowledge content.

An alumnus of the University of California, where she completed her post-graduation and holds a Bachelor’s Degree in South Asian Studies and Management from the School of Oriental and African Studies (SOAS). Her passion for creative content along with the entrepreneurial skills led Ms. Lulla to become an integral part of Eros’ growth story.

Journey to Becoming a Global Leader

Eros STX Global Corporation is a leading global company in the entertainment industry, which co-produces, acquires and distributes films in multiple formats worldwide. We are one of the oldest companies in the Indian film industry to focus on international markets and we believe we are pioneers in our business.

Eros’s legacy of entertaining the masses is a well-trod territory and since inception, Eros Now, South Asia’s leading streaming entertainment service owned by Eros STX Global Corporation (NYSE: EROS), a Global Entertainment Company, developed deeper relations with the audience through its captivating content. One of their initial originals titled ‘Smoke’ was even handpicked to be premiered at the prestigious platform of MIPCOM at Cannes. The series received a stand ovation by the audience combining the global entertainment fraternity including distributors, broadcasters as well as executives from the global entertainment industry. This whole experience was a huge motivating factor.

Creative Offerings that Diversify the Organization

Eros’ wide-ranging slate of movies appeals to Indians as well as a global audience. Indian movies, especially Bollywood, have a massive fan base across countries and Eros has been one of the biggest entertainment studios in the country. Bollywood movies like Vicky Donor, Ra.One, Tanu Weds Manu Returns, Love Aaj Kal, to name a few, have been entertaining movie buffs worldwide.

Eros Now, the premium OTT platform of Eros STX Global Corporation is a global video-on-demand service catering to more than 205.8 million registered users and 33.8 million monthly paying subscribers worldwide with the promise of offering endless entertainment through its varied product features – video in HD, multi-language subtitles, movie downloads, and high-quality original drama series. The OTT platform is well-known for its massive Bollywood and Indian movie library consisting of 12,000+ titles, originals, short-format content Quickie, music and more. Eros Now also caters to all key markets by offering content in 9 languages (Hindi, Marathi, Punjabi, Gujarati, Kannada, Tamil, Telugu, Malayalam, Bengali). They recently announced the launch of Eros Now Prime, a category which will showcase international content in partnership with leading studios like NBC Universal. Also, our merger with STX further enables the brand to deliver Indian content in 150+ countries while also catering to the massive audience for Hollywood content in India.  The merger between the leading entertainment entities brings the best of Hollywood content to India and also offers the best of Indian entertainment to the global audience.

Following the launch of Eros Now in 2015, there have been various accomplishments that the platform underwent, and in the process – it entered new markets, achieved millions of users, and offered pioneering services. The journey has been overwhelming.

Some of the mega achievements include – Eros Now garnering over 205.8 million registered users and 33.8 million monthly paying subscribers worldwide. Eros Now is the first Indian OTT platform available on Apple TV. The partnership with Microsoft in September 2019 led them to offer the audience next-generation online video platform. In November 2019, Eros Now entered a strategic alliance with YouTube Music & Google to provide consumers with a massive music library in conjunction with their premium film and other programming.

Eros’s Journey so Far and Future

In July 2020, the parent company of Eros Now, Eros International Plc, merged with the international studio – STX Entertainment. STX Entertainment is Hollywood’s fastest-growing independent entertainment powerhouse with presence in over 150 countries. With this merger, their aim to deliver star-driven premium feature films and episodic content across a multitude of platforms to the world’s most dynamic and fastest-growing global markets, including the United States, India and the Middle East. The objective of the company has always been to consistently strengthen their reach in significant markets and deliver content that will connect with the increasing audience base for online video streaming which is diversified across genres and taps consumers through various demographics and geographies.

Rishika believes, as a leader, it is crucial to connect with your team and be relatable also at the same time build trust within your team and the organization. She says, “Trust flows both ways – you trust and empower your team, and at the same time, your team builds confidence in your leadership to achieve the goal.”

Another essential thing as a leader is always to listen – you learn more and can have a remarkable impact with an open mind and ear.

Collaboration is another significant aspect, as a leader to join forces inside and outside the organization. Always be curious, it never killed the cat, just took the cat to a different dimension! The ability to prioritize.

Build a team around you that is smarter than you – if you are the most intelligent person in the room, there is a problem!

The pandemic has disrupted the way the entertainment industry operates. Technology will be the key to deliver quality. Eros has always been a frontrunner in adopting new technologies to offer the best consumer experience. They recently also announced an alliance with Epic Games to use its Unreal Engine across production slate, paving the way for real-time technology throughout Indian entertainment.

Success is measured in impact – how much of an influencer and disruptor can you are in your space. Further, Rishika usually analyzes how much this impact will drive positive social change and create a revolution.

Success comes from the ability to drive the desired outcome in any circumstance which can only happen if the leader is inspiring while providing clarity.

Rishika Lulla is empathetic, a good listener. She learns from people, and that is because she keeps an open mind and ears to new ideas, and that makes him curious as well.

One Characteristic of Leader

The ability to inspire. An inspired team births impossible dreams into a reality.

Know where you are going so you can learn and enjoy the journey.

“Sheer love and passion for entertainment! We at Eros represent the massive global audience that truly loves entertainment and believe in delivering the best consistently to existing and potential consumers worldwide.”- Rishika Lulla Singh