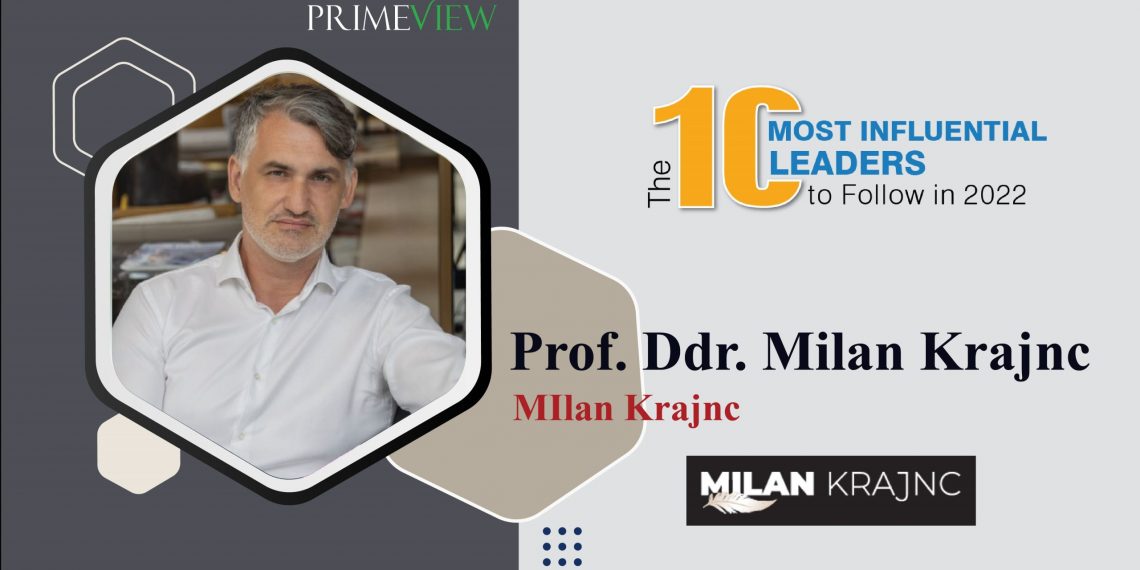 Prof. Dr. Milan Krajnc has been working as a psychotherapist and researcher of the human mind for the last two decades. He is an expert in solving the challenges that often arise from the interaction of different personalities within an organization. Prof. Krajnc is trained for personal advising, psychology, negotiation, lobbying, and marketing at organizations of any size and scope from the local to international level. Prof. Krajnc is an expert on state psychology and local authorities.

While on his work Prof. Krajnc has found that most behaviour comes from childhood which means that we make different decisions in everyday life, mainly because of resentment, anger, complexes that arise from that period.

Maximizing the Potential of an Organization

Krajnc is a psychotherapist and an educator, specializing in leaders, who help form a vicious cycle, where they have entered. His journey began by observing a natural phenomenon in the laboratory, where he first observed as a student of metallurgy and later as a physics student. Here he witnessed, how regardless of the phenomenon, seven identical successive phases always occur.

Prof. Krajnc faced many challenges during his journey. However, no one could take away his motivation. He gained massive experience while running for the President of the Olympic Committee of Slovenia. He started developing various psychological tools, to overcome various psychological patterns. He has also published around 400 books where he talks about relationships and how can people help each other. Prof. Krajnc soon saw his messages in the books positively influencing people to be more confident, more respectful of themselves and their time. In order to achieve greater results with his messages, Prof. Krajnc founded a music group named Monte Cristo, which set his lyrics to music and now spreads his songs in musical form.

Professor Krajnc realized that he needs more ways to communicate with people in order to achieve the greater success of his work. According to Prof. Krajnc, people are now more relaxed, they don’t pay attention to other opinions, thus becoming independent.

Also with the Al-Khalifa Business School, he founded Milan Krajnc AKBS Innovation Venture Lab, where he started developing products for all the five human ‘sensors.’

He is also vastly experienced in various fields, he was a member of the Official Minister and President council in Serbia. He also has collaborated with the police and the army in the education field. Prof. Krajnc was a member of other various State committees in the Republic of Slovenia and Serbia. He is a lecturer and an author of the research and scientific works in the field of Psychology Management.

Therefore, the next step is his research and creating solutions to human psychological congestion, creating a taste therapy.

The first condition for its creation was that the food was clean, which means that the people who grow this food also had to be psychologically clean.

So food had to be produced by the agricultural method of Biodynamics, and people had to live by the psychological method of Sirius Personal Transformation. Only then does the taste follow. So Prof. Kranjc literally explored and tasted the whole world, and he found space and food in the most magical territory in the Adriatic Sea.

The territory is now called ISTRIA, which was a part of Itlay. The area is still famous for lip-smacking food, and here Prof, Krajnc made the project ISTRA.SHOP, where he chose Truffles as the basic product. Truffle has a very specific and healing taste. That is why prof. Krajnc began to create dishes that have an incredible taste and are also healing for human psychological health.

Prof. Krajnc has developed a whole series of wine, oil, and food. His foods are mostly enjoyed by people who influence the example of their surroundings with their image. However, this is not any kind of miracle cure or superfood, but it is the purest food in the world and prepared according to the science of Dynamilogy.

Prof. Krajnc is also the founder of new scientific science, named Dynamilogy, which can create successes in every field, with the help of nature’s formulas.

He was also nominated for the Nobel Prize in Economics. However, he doesn’t grow the food himself, rather he has a huge circle of supporters. The best part is products that are completely useful and clean for overcoming emotional problems receive a certificate that confirms their quality.

With all these revolutionary approaches Prof. Krajnc is trying to change the system. According to him, organizations and businesses are a part of the global economic system, so his approach is changing the economy of our planet. Although economics has never been a primary area of his research, the path has led him towards it, which meant discovering its darkest sides for the sake of ‘higher goals.’

With all these revolutionary approaches Prof. Krajnc is trying to change the system. According to him, organizations and businesses are a part of the global economic system, so his approach is changing the economy of our planet. Although economics has never been a primary area of his research, the path has led him towards it, which meant discovering its darkest sides for the sake of ‘higher goals.’