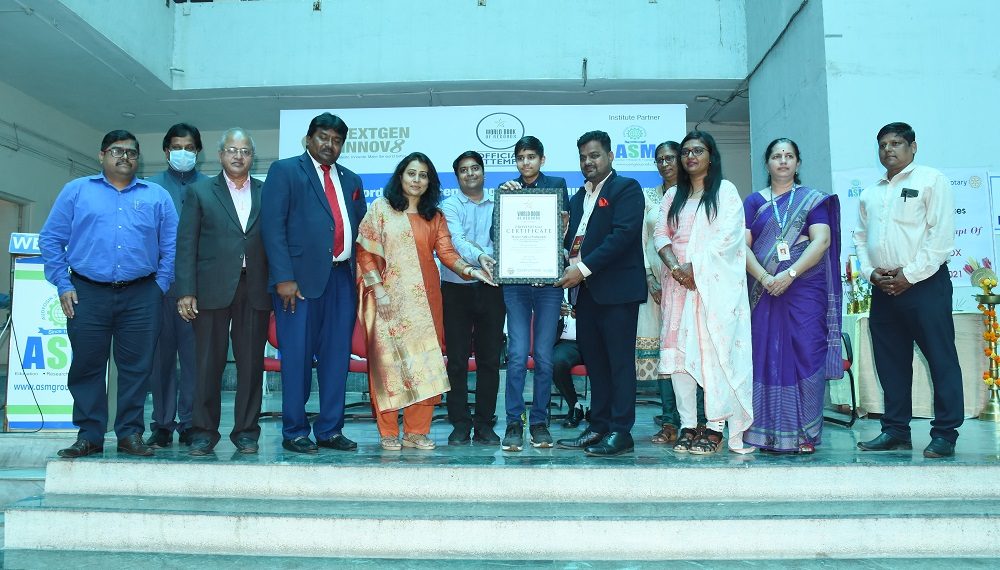 Students in grades 6 through 12, graduates, post-graduate students, and professionals were among those who assembled the kits at the venue and also in different locations across Mumbai and Pune. Apart from NextGenInnov8 Social Foundation Certificate of Participation, registered participants received a certificate from the World Book of Records. The ASM Group of Institutions, ASMA, Vision Digital India, Greycaps India, Young Indians, ASM Rotaract Club, IEEE, NSDF, Indus International School along with 35 schools, colleges and 135 students were partners to this hybrid World Record attempt.

Commenting on the World Record event, Aditya Pachpande, Co-Founder, NextGenInnov8 said, “My passion has always been innovation, and with NextGenInnov8, I want to reach out to each and every young innovator in India and beyond. This World Record event honours COVID Heroes who have come together on this platform to promote the noble cause of assembling DIY UVC Kits for donation to those in need. It gives me immense pleasure to see the participant’s delight and how they are contributing to society during these difficult times. We would also like to thank 135 schools and our partners for their support to make the world record attempt a reality.”

Speaking at the event, Mehboob Chandbhai Saiyyad, Vice President, World Book of Records (India) said, “We are impressed by the product developed by Master Aditya Pachpande. The sanitization procedure will save water, resulting in saving our environment. It can be used in a variety of settings, including police stations, schools, colleges, vegetable vendors, small provision stores, and poor houses, but not medical businesses. We congratulate and extend our gratitude to Master Aditya Pachpande for assembling the maximum number of UVC DIY kit in a single day.”

In his comments, Dr. Sandeep Pachpande, Co-Founder, NextGenInnov8, Chairman ASM Group of Institutes added,”A successful endeavour inspired by a teen’s observation of his mother’s need has sparked the interest of many people, leading to a World Record attempt. This is a one-of-a-kind effort and I am humbled that we’ve been able to enter the World Book of Records. We appreciate each and every participant’s enthusiasm and commitment to this historic event.”

Vicky Daniel Vishwakarma, 12th Commerce, GJC, Chinchwad, Pune, one of the participants, said, “This is my first attempt at a World Record, and it was fulfilling and exciting. During the pandemic, I witnessed the difficulties that we all experienced. While assembling the DIY UVC Kit, I thought about how my modest gesture could make a difference in many people’s lives.”

Founded by Aditya Pachpande, a young innovator and entrepreneur, NextGenInnov8 is an innovation-driven company dedicated to facilitating and bringing about innovative solutions to the world’s problems. it aims to set up innovation clubs in every school globally to teach and trigger creativity, innovation, critical thinking and problem-solving skills in children. The World Record is a first of its kind, student led platform for innovation that will happen later this year. To know more, do visit http://www.nextgeninnov8.com/.

World Book of Records (WBR) is one of the leading organizations in international certification of world records. It works intercontinental from Europe, North America, South America, Africa, Asia and Australia with global network. It recognizes potential of talent and capabilities in world records through international certification. It also honours personalities and lists places of outstanding contribution for humanity and universal peace.