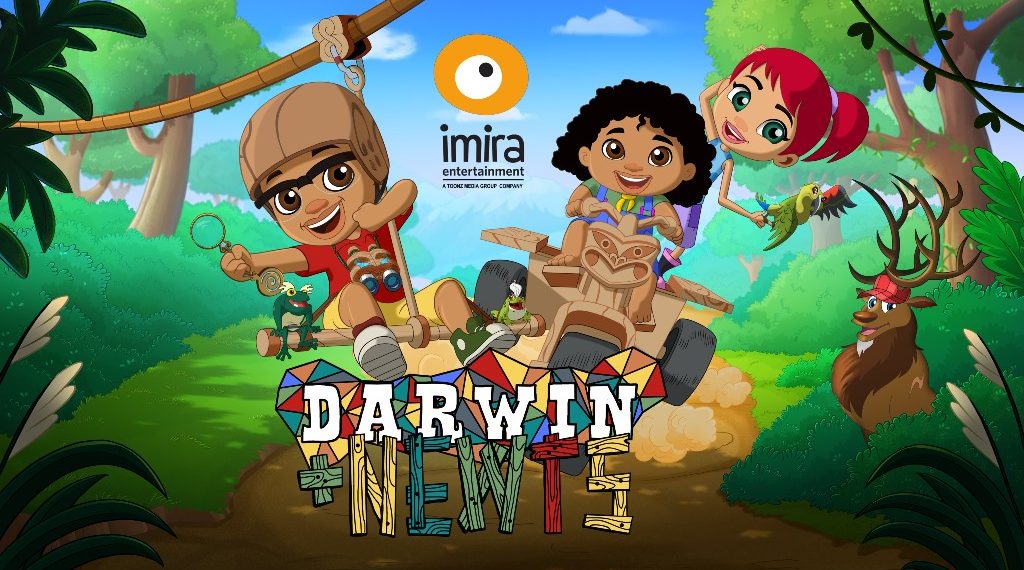 Imira Entertainment, the leading kids and family entertainment distribution and production company based in Spain, has inked a deal with the popular edutainment platform Da Vinci Kids for the distribution of their new edutainment title Darwin & Newts.

Darwin & Newts is a STEM-focused show about two siblings who go on fantastic escapades, discovering and experimenting with early science and engineering principles, while also exploring the natural wonders of the outside world. The 40×11’ series targeted at 4 to 7-year-olds also includes supplementary educational activity fact sheets, and short gamified video clips for the social media.

“We are delighted to have this beautiful animation title Darwin & Newts which has humour, imagination and meaningful educational takeaways for preschool children. With this partnership, the show will now be available to the collective global subscribers of both Azoomee and Da Vinci Kids via connected TV, linear channels and mobile apps,” said Gulshan David, VP – Media Sales, Imira Entertainment.

Da Vinci Kids will service season 1, as well as season 2 of the series, which is currently under production. Besides this, the deal also includes the distribution of the digital science activity shorts accompanying each season in Asia (excluding China and Japan), Africa, Central and Eastern Europe, Russia/CIS, Poland, Turkey, a number of western EU countries (most notably the UK/Ireland, Spain, Italy) and the US. The show will now be available for kids across the world to access and watch from the digital and linear platforms of Da Vinci Kids as well as via the Azoomee mobile app.

“We’re really excited about this series coming to Da Vinci and Azoomee since it’s a great editorial fit for our STEAM-focused fun learning digital and linear channels. Darwin and Newts joins our expanded library of upper preschool content for families in our territories, which we are offering alongside our ever-growing slate of content for older kids.” said Luca Fiore, Director of Content at Azoomee / Da Vinci.

He added that the company is planning to expand the reach of the show through social media, press and linear TV efforts. The Da Vinci Kids TV channel is broadcast in over 100 countries across Central Eastern Europe, Turkey, Russia/CIS, Africa and South East Asia, and is available 24/7 in 19 languages, including English, Polish, Russian, Ukrainian, Hungarian, Turkish, Bulgarian, Thai and Indonesian.

Imira is a leading distributor and producer of kids and family entertainment content for the global TV and digital marketplace. Imira commercializes 4000+ half hours of quality international kids programming and around 150 titles with global appeal. Having solid working relationships with leading broadcasters and digital platforms around the world, Imira’s distribution capabilities extend to Asia, Europe, Australia, North America, Latin America, Africa and the Middle East. The Imira catalog covers a wide range of age groups from Pre-school, Kids aged 6+, Tweens, Teens and Family audience. The Barcelona-based company is the distribution arm of Toonz Media Group, a 360 degree media powerhouse with over two decades of unparalleled experience and one of Asia’s most active animation production studios.

Azoomee / Da Vinci is a kids’ global media company and app development studio with offices in London, Berlin, Istanbul and Luxembourg. In 2019, Azoomee acquired Da Vinci Media, thereby forming the no. 1 educational entertainment company in the world. The company’s mission is to unlock children’s full potential by igniting a passion for discovery and imagination through inspiring videos and games. Through its mobile apps, TV apps, and TV channels, the Azoomee and Da Vinci content is watched by an audience of 60 million families & kids in over 190 countries and in 19 languages.