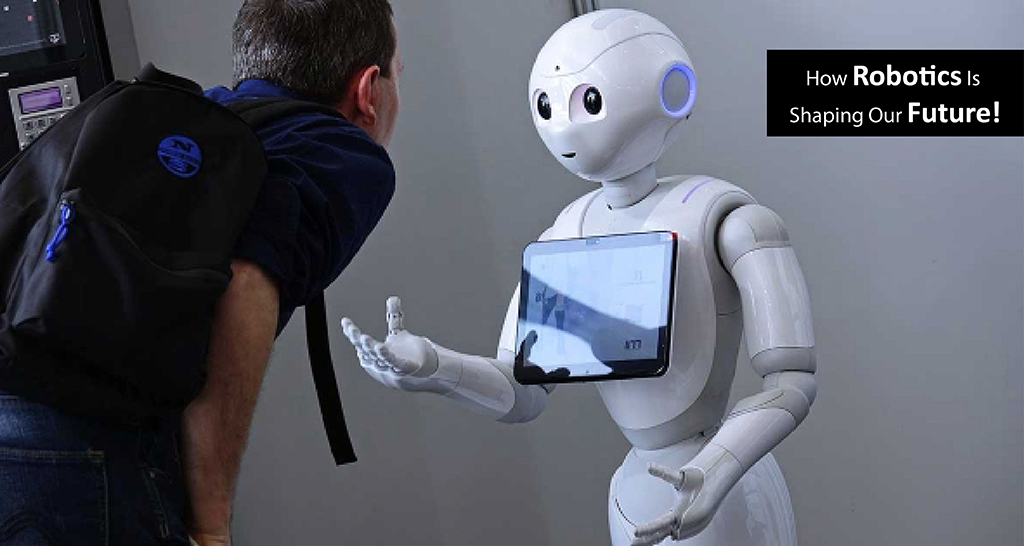 How Robotics Is Shaping Our Future!

We, humans, are always trying to make our lives better by using technology. Robotics is an essential and useful part of engineering today. It deals with mechanical engineering, computer science, and many more. Robots were invented to assist human beings in their work and to go and work where humans cannot go. So, this robotics science is also one of the innovations to introduce ease to human life. In many countries, industrial and agricultural sectors are also used to build smart cities.

Robotics involves the different kinds of features and areas through which the actual designing of robotic models is performed. So let’s try to understand the major fields in robotics.

A robot’s ability depends on how efficiently it communicates with its user and analyzes the instructions in the form of data to learn things. Effective robots’ communication with humans is essential because it allows humans to teach it and improve its programming by adding new skills. A gaming controller is the best example of an operator interface.

To complete any task, robots need to do movements, especially those made for industrial work or any field work. Some robots’ body parts are structured like human anatomy for performing movements and actions like humans. Mobility development is based on different types of robots. That is why engineers design robots as per the requirements. The skill and usefulness of robots depend upon mobility development.

Manipulators play a vital role in the mobility advancement of robots. Robots use these manipulators to pick up objects and move them according to instructions. Robots’ moving parts or appendages are used like human hands to do certain movements. So this is also considered one of the essential fields in robotics science.

Programming is a coded language that helps robots to communicate with humans. We can say programming language is the brain of robots which helps them adapt to the environment, make necessary changes in them, and learn new things. Different types of programming languages are used to perform specific actions in robots according to that type of robot. So, you can understand the importance of programming in robotics.

In humans, there are several sensing organs by which they can acquire sensing abilities. While designing robots, engineers introduce some sensors that help analyze input and environment properly. Likewise, robots also have sensors to perform actions and gather information to make correct decisions.

The word ‘Robot’ is derived from the Greek word ‘Robota’ Which means to perform hard work and labor. Different types of robots can do different tasks according to their mechanical structure and design. So, the construction of robots depends on the basis of their work like some robots are used for industrial work, some for agricultural and household robots, and all of these work decide the typical body parts and shape of robots. According to their function and shape, they are categorized into the following types.

Robots were made to do things more efficiently than humans without any external guidance. A program is assembled in robots, coded in such a way that they perform only that desired work continuously with speed without any support and help from the humans. An example of pre-programmed robots is industrial robots. They do tasks like welding, picking parts, and fitting inside engines. According to these different tasks, their programming is done, and their parts are modified.

Robots are designed in different sizes and appearances, but humanoid appearance is the most acceptable and popular. In the past 20 years, unbelievable forms of human robots have been designed by scientists. The robots that look like and mimic humans are recognized as humanoid robots. These humanoid robots have shapes, body parts, skin, and hairs that are completely like humans. The first humanoid robot ‘Sophia’ and the first robot citizen, was made in 2016 by Hanson Robotics company in Hong Kong. Sophia can shake hands with people and recognize past actions and incidents. She interacts and communicates with humans and responds appropriately to incidents, and asked questions.

Autonomous robots are generally used in industrial areas, flying drones, and aquatic robots to gather information and click pictures. Autonomous robots work in those areas where humans can’t perform and do work. So these robots are programmed and constructed to do tasks without any guidance. They make decisions and perform actions using sensors to detect the surrounding environment and perform functions or tasks according to that. These sensors give signals and messages to them and then use programming language as a brain to provide output in response to particular things.

Recently robotics technology largely supports industrial work by increasing the speed of monotonous tasks which sometimes humans can not do. Any industry is filled with various manufacturing processes and tasks, so labor is needed to perform each task. So, according to functions in industry, mechanical parts of robots that act as labor was designed. There are some common types of industrial robots like – Cylindrical, polar, Cartesian, Scara, and Delta.

Space robots are used to explore space. These are in the form of spacecraft which are designed to work on planets like the moon and mars. You might have heard about the mission by NASA, like rovers sent to mars. These specialized machine robots collect soil samples and gather weather information from space or that planet. We can send this robotic spacecraft to space without worrying about losing something and can obtain the information we want.

In many sectors already, robots are working impressively. But in the future, Artificial Intelligence will join robotics, and more unbelievable results may see in the future. NLP (Natural Language Processing) will also make considerable changes in robotics. Robots will increase productivity and accuracy in work, and in the future, many industries and sectors will rely on robots which may turn in losing of jobs for many people by 2030.

Tags: Fields of RoboticsShaping Our Future