Home The 10 Most Influential Leaders in Legal Services 2022_Cover Story 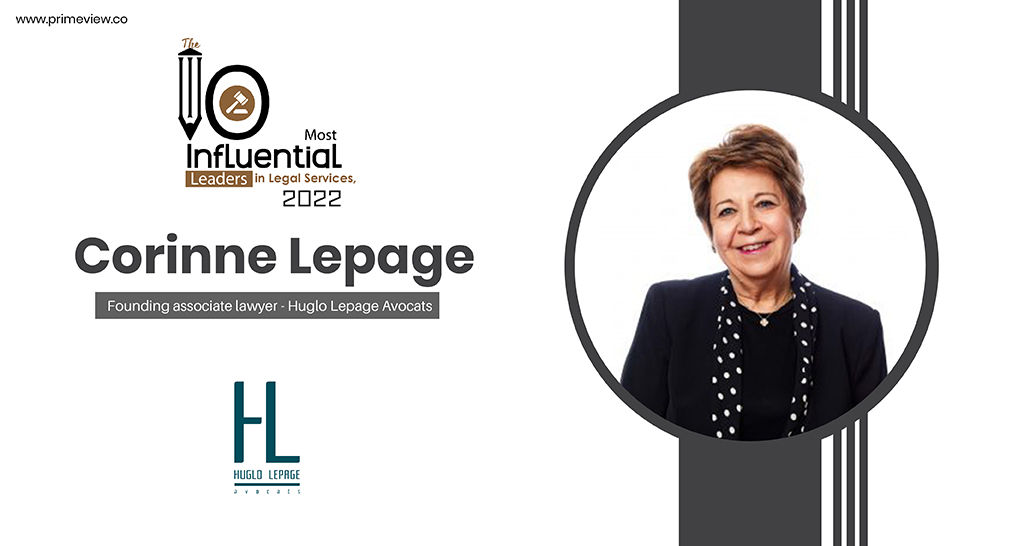 Meet Corinne Lepage, the founder of Huglo Lepage Avocats offering legal advice and litigation services to a diverse clientele: associations, public authorities, SMEs, and some multinationals. Corinne’s studies and interest in law and economics led her to her thesis on externalities and to her training with a lawyer at the Conseil d’Etat and the Cour de Cassation. However, her meeting with Christian Huglo, who had led the first environmental lawsuit in Europe, was decisive, and Huglo Lepage Avocats was born on 1st January 1978, a few months before the beginning of the historic Amoco-Cadiz case conducted in the United States, which led to success after 14 years of court proceedings. A graduate of Sciences-Po and a Doctor of Law, Corinne taught at the university and Sciences-Po for over three decades and has held several key political positions, including Minister of the Environment, MEP, etc. Today she chairs multiple associations and has authored nearly 30 books.

Today Huglo Lepage Avocats has around 20 people, and it is the first law firm bearing the status of a ‘mission company.’ The law firm offers legal advice and litigation services to a diverse clientele, including associations, public authorities, SMEs, and a few multinational companies. Huglo Lepage Avocats has a very strict ethical charter regarding itself and the cases it defends or advises. It is a pioneer in environmental and public law, but the law firm is also quite active in European and international environmental law, in private civil and criminal law for cases involving the environment, and in energy law, a growing sector. Huglo Lepage Avocats’ consulting activities have led it to assist companies in their desire for transformation: CSR, ESG and to participate in much strategic advice to several financial institutions.

Serving a Wide Range of Clients

As a law firm, Huglo Lepage Avocats serve all types of clients, from private individuals to multinationals. However, it wishes to work for individuals and companies committed to protecting and progressing their rights. It defends and advises public or private entities that can carry out potentially polluting activities but are involved in a prevention and continuous progress approach. The law firm has a very loyal client base and is extremely attentive to the relationship of trust that binds them together.

Change is the Key

Corinne was sworn in in 1975, and she was a member of the Bar Council and then became the Secretary of the Paris Bar Council in 1990. Before the arrival of legal counsel, the Paris Bar was not very big. However, deontology was extremely rigorous, and the faith of the place had a meaning. Presently there are several lawyers, and while some often face financial difficulties, many of them, especially women lawyers, give up robes only after a few years. Over the years, the profession has seen numerous transformations with new rights, but the increasing competition from chartered accountants and other advisors have grown quite a fewfold. In addition to respecting deontology, Corinne feels competence and working with other professionals are very important.

“If humanity has no rights, men have no rights.”

Corinne has won several cases that have marked the history of environmental law. Amoco-Cadiz, Erika, GMOs, Cattenom, Grande-Synthe, pollution of the Rhine, and CRIIGEN against Monsanto are emblematic cases in France and Europe.

She says, “I am quite proud of some of the successes I have achieved as Minister of the Environment. Finally, since 2015, I have been promoting the Declaration of Human Rights, whose supporting association has just been admitted to ECOSOC, a UN advisory body. It is an essential text I would like to see universally recognized.”

Huglo Lepage Avocats is strongly growing with an average of two recruitments yearly and training a significant number of trainee lawyers. The law firm strives to combine a consistent quality of work with great availability.

“We are aware that we are in very promising sectors, where we have been pioneers and want to remain leading players. Our numerous awards in recent years and months encourage us to do so. We are proud to be the first law firm to be designated as a “company with a mission,” a new category of highly committed companies.”- States Corinne.

Suggestions for Younger Self

Corinne suggests readers be open to others and the world. She says, “Not to be locked into the law but to try to reflect permanently on how the new scientific knowledge, in particular, the ecological tragedy that we are living can impact the rules of law and allow a better taking into account of the fundamental needs of our society.”